Revisiting Nancy Drew as an Adult: A Tale of Three Books 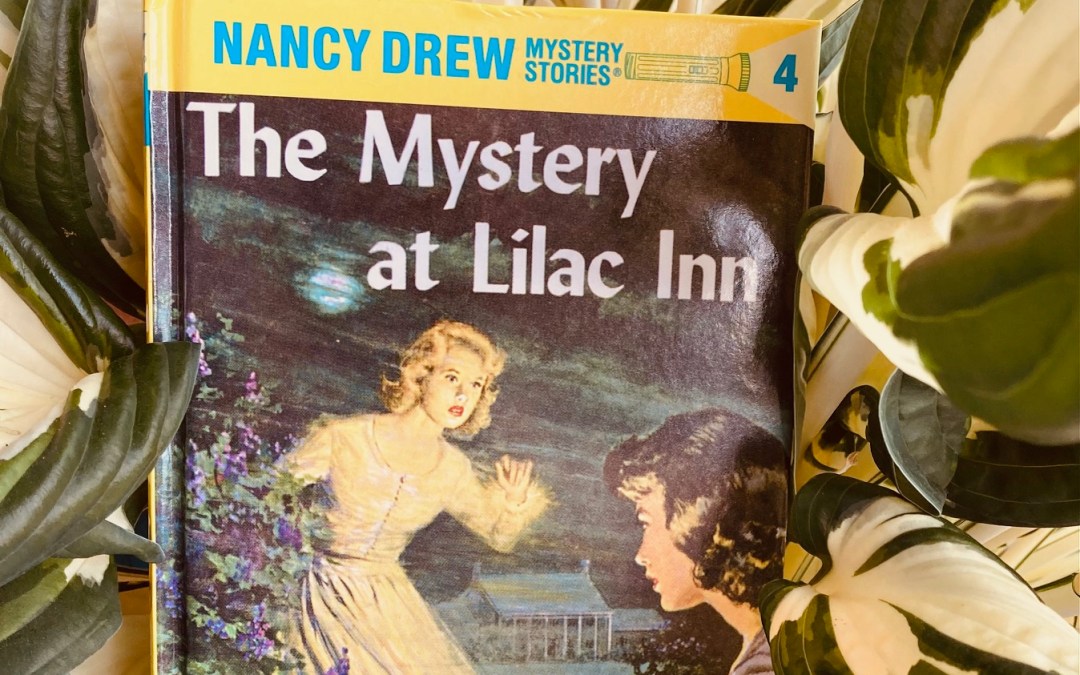 I know I’m not the only one with fond memories of racing through Nancy Drew mysteries as a young reader. I always loved mysteries as a kid, and still do as an adult, but I now recognize the Nancy Drew series as my introduction to cozy mysteries, which then led to my love of Murder She Wrote. It can be a dangerous thing revisiting child loves as an adult, because inevitably these joys rarely hold up decades later. Still, I chose a few Nancy Drew mysteries at random to dive into during my most recent vacation, and despite my annoyance with the outdated and oftentimes offensive gender stereotypes that pop up throughout these novels, I enjoyed that satisfaction of solving the mystery alongside the adventurous detective that accompanied me through my childhood reading. I’ve read three of the 64 books in the series, and offered a mini-review of each below. If you’ve revisited a beloved childhood book as an adult, please let me know how it went in the comments section!

The Mystery at Lilac Inn begins with Nancy and a friend toppling into the river while canoeing to the Lilac Inn, set to open in a few months. Unconcerned by their accident, they swim to shore and dry off at the inn, which is owned by a friend of theirs. Once there they learn of some strange occurrences, including sightings of a ghastly female figure and tools going missing. I was surprised at the resolution to this mystery, it involves a homemade submarine (!), and the criminal’s motivations run much deeper than originally suggested. The use of red herrings is also admirable, I was thrown off the scent more often than not and when the culprit(s) were finally revealed, I didn’t anticipate the extent of their confessions that roll out over a few chapters. I think that’s one thing that I really appreciated as both as child and adult reader; there is nothing left unexplained in these novels!

Keeping in mind these books were written in the 1930s, one must suspend their modern-day perspective of cultural sensitivity when reading this series. The Mystery of the Ivory Charm centers around a young East Indian boy named Rishi who Nancy rescues from a circus where he is clearly being mistreated by his guardian. Nancy is adamant that he must be taken care of properly, so a tutor is hired to continue his education while they figure out what to do with him. Unfortunately there are a few nefarious characters who want to take advantage of Rishi and his secret past, and he is kidnapped not once, but twice from Nancy’s care. Keep in mind this book is meant for children, so we must also suspend our disbelief! Aside from these questionable plot turns and the outright exoticizing and othering of Rishi’s culture, this story was fairly engrossing. Its suggestion of mysticism brings that supernatural element that piqued my interest as a child, and continues to keep me captivated as an adult.

This was also the first time I had been re-introduced to Nancy’s friends George and Bess, who came to her rescue more than once during her adventures. George is the brave one, game for just about any undertaking Nancy suggests, while Bess prefers to tag along and hang back when things get dangerous. I have fond memories of meeting these two girls in many books in the series, but I never noticed until now, how Bess was described as “slightly overweight” (p. 3). Overweight compared to what? Why is this even relevant? How come men were never described in relation to their appearance? I prepared myself for this kind of sexist language as I cracked open these books knowing they were written generations ago, but it still irks me when I come across things like this.

Lastly, The Clue in the Jewel Box continued to highlight Drew’s uncanny ability to correctly judge a person’s character after just having met them, while also focusing on her never-ending search for puzzles and problems to solve. In this installment Nancy has befriended a queen-in-hiding with an impressive set of jewels and figurines left over from her days of royal court. She asks Nancy to help her find her long-lost grandson who was kidnapped as a child, and as we know, Nancy loves a good challenge, so she eagerly takes up the case.

At this point in the series, Ned and Nancy are declared to be “friends of long standing. They enjoyed the same things and frequently went together to parties” (p. 67). If my recollection is correct, they eventually become boyfriend and girlfriend, but of course things move at a snail’s pace because showing overt romantic feelings is considered un-lady-like, and demonstrating fine morals seems to be one of the most important messages in these books. I could go on and analyze the fraught relationship these plots have with labelling those who are ‘good’ and those who are ‘bad’. You can only be one or the other in Nancy Drew’s world. And although the adult me rolls my eyes at this simplification, it is no doubt one of the reasons I enjoyed it as a child. Don’t we all wish things were this easy? I certainly appreciated this trip down memory lane, but I’m also happy to leave Nancy Drew in the past so I can tackle the more realistic books of today.