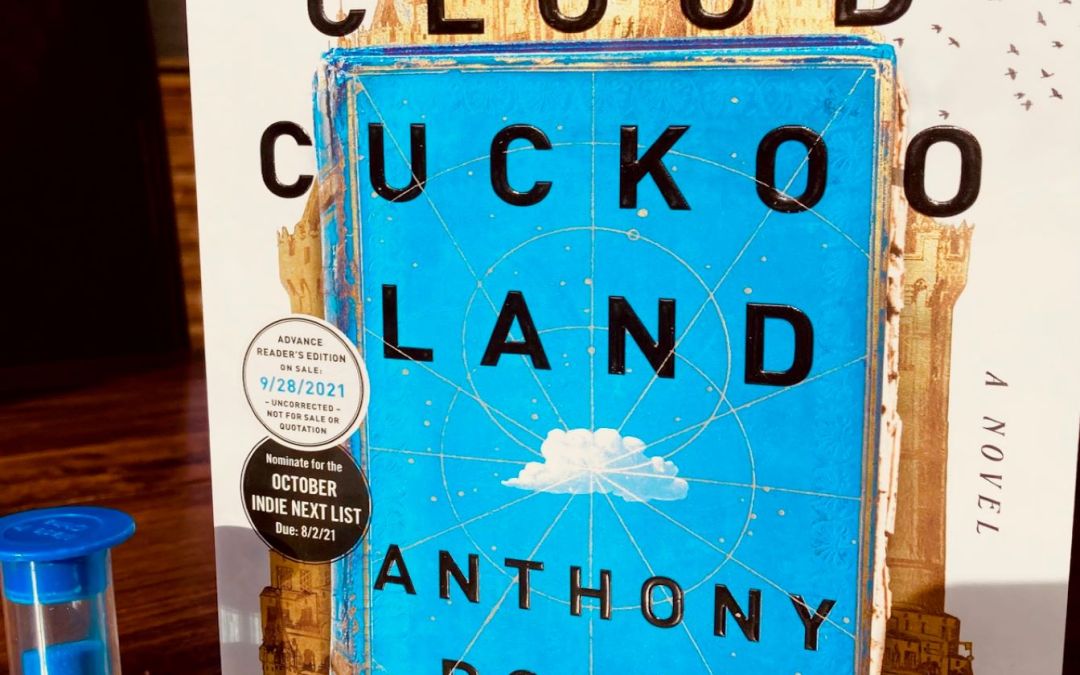 Very rarely will I have the foresight and planning to read a book well before its release date, and post the review to coincide with its hype and subsequent launch. Luckily I’ve managed to do just that today! Some sources have claimed that Cloud Cuckoo Land by Anthony Doerr is one of the most anticipated books of this big Fall book season, so when I was lucky enough to get my hands on an advanced reading copy, I thought I’d brave the 600ish page count and dive in. I’ve always been meaning to read a Doerr book every since the success of All The Light We Cannot See, (which again, I have not yet gotten to) but now that I’ve read and enjoyed this one, I may have to make my way to his backlist because I really enjoyed his latest novel, it’s the perfect mixture of entertaining and inspirational.

We meet five different characters in vastly different time periods, and each of their lives are affected by one book in particular: an ancient text about the story of Aethon. In 1453 outside of Constantinople, we meet Anna, a resourceful young woman who is dedicated to taking care of her sister despite their poverty and the army outside of their walls, ready to lay siege against the city at any moment. Omeir is one of those soldiers outside of those walls who has been despised and feared for most of his life due to his hare lip. In 1950s Idaho, Zeno is a young boy trying to fit into his new life in this very cold place, finding solace in the local library, its books and the kind women who work there. Decades later we find Zeno in the same library, where someone has brought in a bomb, and holding everyone hostage. We also meet a young girl Konstance in the future, who is on board a ship hurtling through space to a distant galaxy in search of a habitable planet, now that Earth is unlivable. These alternating perspectives are interspersed with Zeno’s translation of the Aethon story, which brings comfort to each character at various points in their lives.

Like many readers, when I’m introduced to a bunch of new characters in quick succession at the beginning of a big novel, I’m a bit put off, which I definitely was in this case. I’m not a fan of epic fantasy novels (Lord of the Rings is one of the few books I’ve picked up and abandoned less than half way through) and I was concerned this would be similar, but thankfully, Doerr offers enough information to keep us invested in each character’s storyline while still pushing the plot along at a reasonable pace. He also offers us small glimpses into the connections between each time period and why these specific characters are relevant to each other, which drives the reader forward to discover when the threads come together. Also, the chapters are quite short, so there is rarely large blocks of text that overwhelm the page; I was surprised at how quickly I moved through this novel.

Doerr’s ability to authentically depict such obscure time periods, even his guesses about the future, were fascinating to read about. The challenges of each period, from the fear of war and hunger mired in a physically exhausting way of life to the comfortable yet mentally isolated existence on a small rocket ship all seemed entirely believable. Because we haven’t experienced these times personally, we can never truly understand how accurate these descriptions were, yet Doerr uses our imagination to the best of his ability, playing on our beliefs to heighten the suspense of each dilemma the characters face. Most powerful of all were the sections that took place in our present day, where one of the characters becomes completely radicalized due to his fear of climate change which felt eerily reminiscent of the anti-vax movement that seems to be gaining ground during this pandemic.

Many people will choose the word ‘epic’ to describe a book like this, typically due to its length or large span of time it crosses. Despite the wide swath of humanity that Doerr attempts to include here, his individual characterization is incredibly strong and in-depth, which is my theory as to why his books are so popular. One character in particular, Bunny, the single mother of a child diagnosed with numerous disorders really stuck with me. She works tirelessly as a waitress and cleaner to make ends meet, but never seems to give up on her difficult child despite her exhaustion:

The magnetized name-tag clipped to her shirt says HOUSEKEEPING ATTENDANT BUNNY. Her name is smaller than her job (p. 85 of ARC).

These two sentences encompass so much of her life, her struggles, and how unfairly society treats people like her. Despite this all stacked against her, she never gives up, she never complains, and she’s a beacon of hope throughout the novel. She’s a fairly minor character, we never get her perspective on things, but Doerr’s ability to make us care about each and every level of the plot is because of these small details.

I think it’s safe to say I believe this book deserves the hype its received. If you manage to get your hands on a copy soon you should go ahead and dive in – it’s worth the potential wrist cramping!