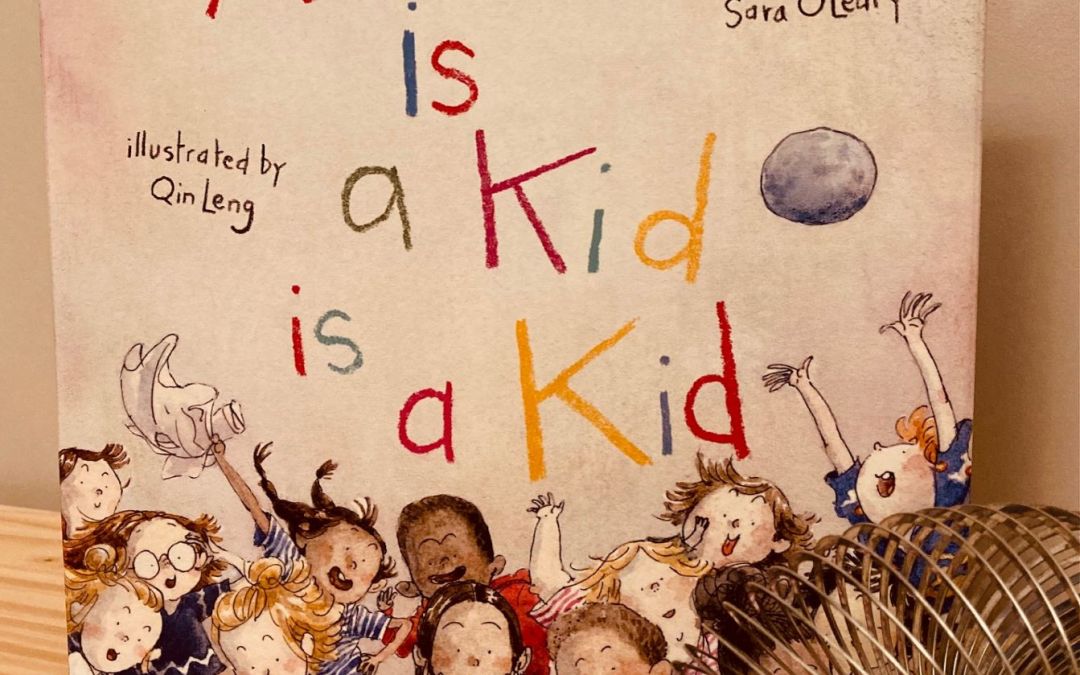 Anything Cale Atkinson writes and/or illustrates tends to go over well in this house. His graphic novel series for early readers is a new favourite of my kids because it’s not too text-heavy and the pictures are super cute. Simon and Chester first appeared together in the picture book Sir Simon, and now that they have their very own series, we are getting to know more and more about this famous duo: a young boy who lives with his grandmother, and a ghost who reluctantly does ‘ghostly’ things but prefers to focus on his hobbies. Simon and Chester Super Sleepover! is the second in the series, and deals with the very serious task of preparing Chester for his first sleepover. We also get a glimpse into Chester’s life at school where he’s often the target of his class bully.

Simon is a funny character that makes not only my kids, but myself and my husband laugh; even though he is a ghost, his dialogue is hilarious, so I can confidently say these books are just as entertaining for adults as they are for children. The humour extends to the plotline, but not in a nonsense way that Dog Man tends to – instead, the humour is a nice distraction from the subtle but serious undertones of the story, like showing courage in new situations, and helping out friends even when it’s the difficult decision to make. As a parent, I’m so relieved that Atkinson is growing his books with my kids so we can continue to discover his new work together.

My favourite writer and illustrator duo Sara O’Leary and Qin Leng have come together again to write a MUST HAVE picture book for every family. A Kid is a Kid is a Kid is a follow-up to A Family is a Family is a Family and once again, I found myself incredibly moved by this story. Written from the perspective of various children, each page is a different kid redirecting a question that is frequently asked of them: “I can think of better things to ask than if I’m a boy or a girl” or a little girl with a prosthetic leg “Ask me what I can do, now what I can’t”. The questions these kids bristle against are ones that both kids and adults ask, and it’s a reminder to not only be sensitive about people’s differences, but to celebrate them. As each child asserts themselves, they join the larger group of children, accepting of one another and excited to include others. The ending highlights all the kids together, and the one question that all children want to hear: “Do you want to play?”

With only a sentence or two on each page, the text punches its message home in a way that appeals to children; it’s rhythmic, unapologetic, and accompanied by colourful images with lots of detail. My kids love this book for all those reasons, but they mostly love shouting ‘A kid is a kid is a kid!’ because it rejoices in the autonomy, confidence and quirkiness that children are sometimes reluctant to demonstrate.

A Library Book for Bear by Bonny Becker, illustrated by Kady Macdonald Denton appeals to my everlasting love of a book about books. Although I wasn’t familiar with it before, this is part of a series all about the friendship between a big bear and little mouse. In this particular story Mouse is taking a reluctant Bear to the library to pick out some new books, as Bear has 7 books in his house, and feels that’s plenty enough. Irritated by the outing and forgetful to keep his voice down, Bear gets shushed by a few creatures at the library, but on the verge of a tantrum he gets distracted by story time. Luckily this librarian is reading a book about pickles (one of Bear’s favourite things) so he quickly sees the value of discovering new stories.

I’m torn when it comes to this picture book, because on one hand I love the message about the importance of reading different books and pushing oneself out of our comfort zones. Still, I found Bear quite grumpy, and downright mean to Mouse – plus he never apologizes for his behavior, he just realizes the error of his ways and everyone quickly moves on. Perhaps I need to read the other books in the series to get a sense of their friendship dynamics, because this particular book has won a few awards, so maybe I’m just being picky? It came out in 2014, and surely we haven’t changed our society’s expectations around the treatment of others much since then. My kids didn’t really pick up on this mistreatment of Mouse, they enjoyed the descriptions of the library, plus they enjoyed making the shushing noises along with me, so this is really an adult complaint only.