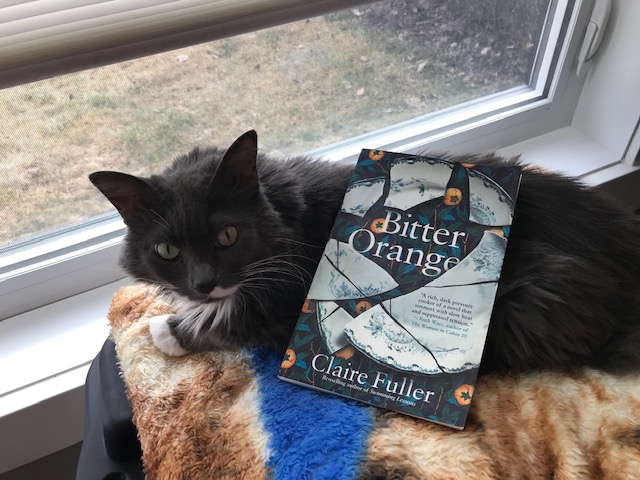 There’s something about a book set in a creepy old house. I’ve read a few of them lately that have really stuck with me, but Bitter Orange by Claire Fuller is different in that the house itself isn’t the scariest thing about the book (although it certainly adds to the overall ‘creepy’ factor), it’s what the characters are capable of that make this book eerie.

Frances Jellico is a middle-aged woman who has been socially isolated for the majority of her life, taking care of her cruel, aging mother until the old bat finally dies (sorry not sorry). Now that Frances is finally free to do what she likes, it’s 1969 and she lands a summer job taking detailed notes on the ‘follies’ of the garden of a dilapidated old mansion in the countryside. Upon arriving there she learns she won’t be alone; her roomates are a strange couple named Peter and Cara, also there to detail the remaining structures of this once-grand estate. But as one would expect from a literary thriller such as this, nothing is what it seems…I loved Claire Fuller’s first and second book, each very different but enjoyable in their own way. Her third book is a foray into a very crowded book market of untrustworthy narrators among ominous settings, but her characterization is just so strong that it worked for me.

We see the world through Frances’s eyes, and her discomfort around other people really set the uncomfortable tone for the book. She doesn’t understand most social cues, so when she relates things that are happening around her I didn’t trust her observations about other humans. Peter is just as mysterious as Frances herself, which is probably why they became so close, clearly too close for his beautiful yet unhinged lover Cara, who is annoying to read about because she’s so naive and selfish; I couldn’t wait until something bad happened to her (sorry not sorry).

There are some truly chilling scenes in this novel. The majority of the house is boarded up, and it was looted after WWII, so it’s more or less empty. One description in particular really stayed with me; a room was wallpapered with pictures of peacocks all over it, but all the eyes of the birds were cut out with a knife. Later, Frances receives an envelope with all the missing eye pieces. There’s also some mention of potential ghosts and hauntings, although that storyline dries up as we near the end of the book. What’s most mysterious here is the behaviour of each character, as many things don’t add up for the reader. Once the summer of ’69 begins to go south for these three due to money being tight and various jealousies becoming more evident, Fuller eventually chooses the ‘what’ of the story and follows through with a twisty (but not altogether shocking) ending.

What’s of note is the way our allegiance ebb and flow with Frances. We immediately sympathize with her because she’s the narrator and has clearly had a difficult go of it, but when her obsession with Peter and Cara becomes more and more evident, it’s difficult to not find fault with some of her actions, even if Cara is sometimes asking for it (sorry not sorry). Yes Frances misses social cues, but at what point does her behaviour tip into the extreme? What are we willing to forgive? It’s a dark setting, with even darker characters and intentions so it’s up to the reader to decide where the ethical line lies for them.

I know some people were frustrated by the dropped threads in this one, but to me, the gradual tension in the atmosphere is what’s enjoyable, and the build-up of dread is what kept me turning the pages. We are slowly given the backstory of each character, piece by piece, but none are truly revealed to us as a whole which is why we are still left with questions at the end of the novel; in my opinion that’s a good thing. This is the We’ve Read This book club choice for June, so please register for this event if you’re interested in discussing further!