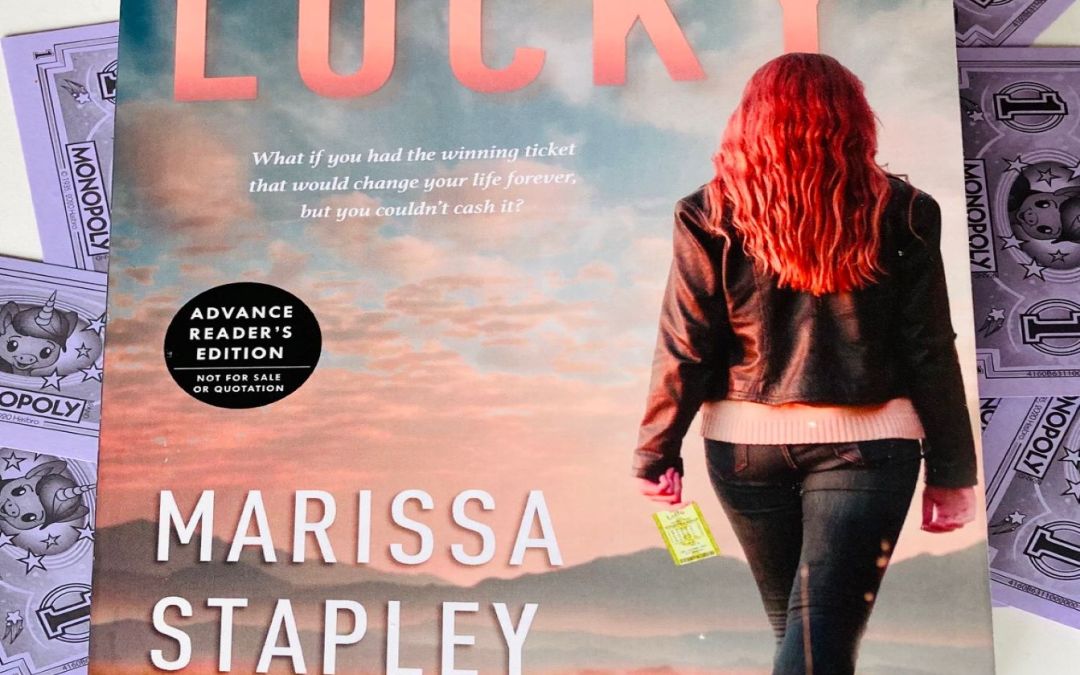 This book was sent to me months ago, and I’ll admit I didn’t have immediate plans to read it simply because I had so many other thrillers ready to go on my shelf. But then, Lucky by Marissa Stapley was chosen by Reese Witherspoon’s Book Club, and I usually enjoy her book club picks when I come across them, so I took a second look at this one (which is a clear example of why book clubs have a great influence!). I also recently reviewed and enjoyed Stapley’s book that she co-wrote with Karma Brown, so I was quite sure I’d like her latest solo attempt. I flew through this book in a matter of hours, it was easy reading and very plot-driven, perfect for a vacation read.

Lucky’s childhood was different than most. Raised by her smooth-talking father, they traveled the country pulling cons on people, moving from place to place making money wherever they could and leaving right before anyone could pin them down or turn them in. Growing up in this environment, Lucky develops the skills to become an expert con-woman of her own, meeting a like-minded man who despises the ‘normal’ life, together swindling people out of their money with a plan to flee the country and live out the rest of their lives on a secluded island. But when her boyfriend disappears and Lucky is left to take the fall, she evades police and goes into hiding, desperate to find the mother she never knew and keep herself alive long enough to make amends to those she wronged. Hunted by both the FBI and the shady characters that worked with Lucky and her father in the past, she’s in search of a family that she can be proud of, but things are complicated by the fact that Lucky has an incredibly valuable lottery ticket worth hundreds of millions of dollars, but is unable to cash it when on the run from the law. Never truly happy with this shameful lifestyle she’s led, she hates to take advantage of people, but knows no other way of making a living.

A unique coming-of-age story, this novel explores the fine line between being a ‘good’ and ‘bad’ person, and what leads us down certain paths as we grow older. I’m not sure how this is possible, but I connected with, empathized, and rooted for Lucky, even though she spent the majority of her 26 years swindling people. Yes, it’s often suggested that she didn’t enjoy hurting people, but she still did it! She could have easily gotten a real job and made money legally, and she does for a few days at a time here and there, but for the most part she’s embroiled in criminal activities throughout the novel. The flashbacks to her childhood and her desire to lead a normal life play a large role in the empathy we build for her. Her father isn’t negligent, it’s clear he adores her, but he is so clearly leading her down the wrong path we can’t help but feel that her future in crime is entirely his fault – this book is a really interesting analysis of how influential our childhood can be.

Something else I really appreciated about this book was Stapley’s plotting – she does not rely on the often used ‘that day’ form of suspense by withholding critical information from the reader. Instead, as Lucky is on the run together we slowly piece together her past; what was deliberately hidden from her plus what was simply unknown. There are a few twists that shock, but for the most part I could anticipate what was going to happen. This isn’t a criticism of the book, instead, the focus is on the development of Lucky as a character, and the realization that as readers we can trust Lucky’s instincts, even though it’s dangerous for other characters to trust Lucky at all.

There’s a surprising amount of emotion in this book, and I know I haven’t given Lucky enough credit or due in this review – she probably sounds terrible, but please believe me when I say she does deserve our sympathy. She may a bit naïve, but for a woman in her 20s, she accomplishes quite a bit with very little encouragement or support, which is a redeeming quality I certainly admire in people both real and fictional.