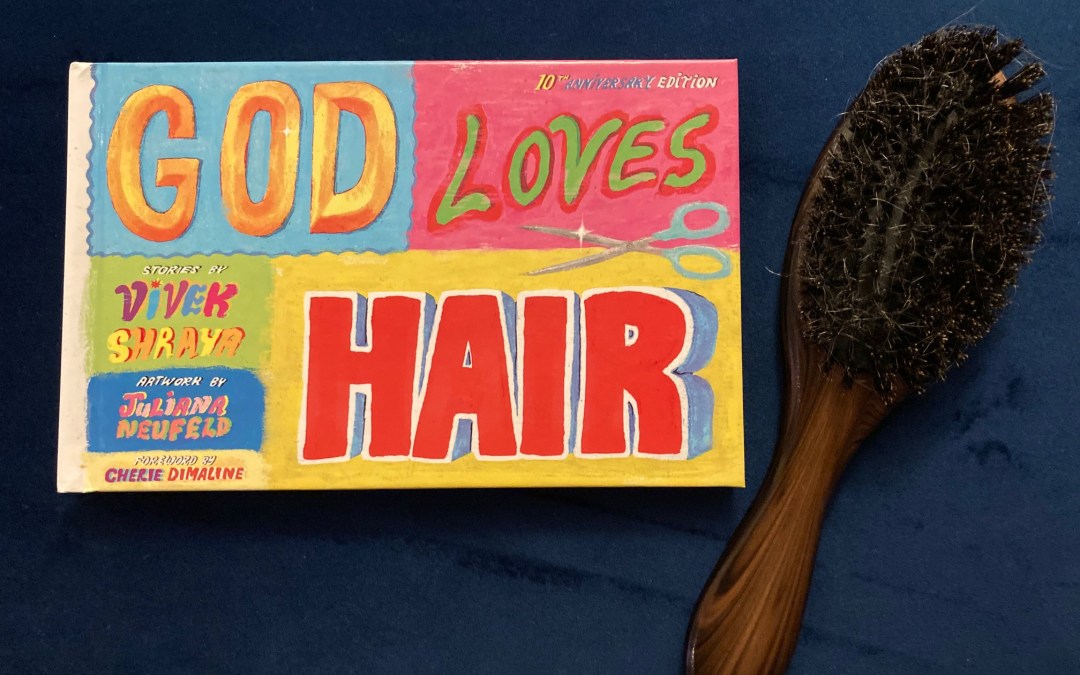 I’ve raved about Calgary author and artist Vivek Shraya on this blog before, so when given the chance to review the 10th anniversary edition of her first book God Loves Hair (previously self-published) I was excited to dive in and witness the evolution of her writing. Now that she’s a famous Canadian, it made sense to re-release this book with new illustrations and a lovely foreword by equally-famous Canadian author Cherie Dimaline. This book is technically written for a young adult audience, and I have no doubt that a teenager would glean different things from it that my 35-year-old self has, but I still enjoyed it even if I wasn’t the intended audience. The graphic novel-like feel to this re-release adds a youthful flair to the already gorgeous prose, and because each story builds onto one another, the evolution and inner growth of our main character feels both authentic and natural. Capturing both the beauty and awkwardness of puberty, I’d love to see this book on the shelf of every high school student that’s in need of a little encouragement or validation.

Although this book is labelled fiction, I suspect it closely follows some of the experiences Vivek had growing up as a young boy in Canada. In the preface she explains that she was born in a boy’s body, and was still navigating her gender identity when she first wrote this book back in 2010. The book is written from the perspective of a teenage male who discusses both his internal battles, and then external challenges he faces on a daily basis. Typical coming-of-age stories are recounted here including the growing of hair all over one’s body, the fascinating with sex and nudity, and the desire to fit in with one’s peers. Our narrator is bullied by the boys at his new high school, yet he finds solace in the female friendships he so easily forms. Because of this preference he is labelled ‘Gaylord’ by the other boys and even though he’s confused by this he continues his attempts at fitting in by purchasing a hat with a sports team on it, although he never watches sports. Desperate to fit in at home too, he aches for his father to introduce him to certain rites of manhood like shaving, yet he’s also fascinated by the bold and colourful lipsticks he finds in his mother’s bedroom. Surprisingly religion is a safe-haven for him, and praying to his Hindu gods every Sunday seems to be one of the few ways he finds respite.

The hardcover format and illustrations lend an impression of formality and seriousness to this collection of linked short stories, yet the text is exploratory and open. There are so many aspects of growing up that terrify even the most confidant of kids, but when the boundary between male, female, gay and straight is so fluid, the questions only pile on top of one another. The general confusion of our protagonist is what makes this book so relatable, and reading it brought me back to my own days of puberty. So many of us would prefer to forget those days, but like every good artist, Shraya leans into the discomfort, placing us right in the school hallways of our memories. The result is not a negative experience for the reader however, instead, it creates a solidarity between the artist and witness that helps both of us heal from those potentially painful rite of passage.

I really appreciated the emphasis on religion and religious symbolism too. The young boy’s focus on a few Hindu figures that resonated with him helped to break down the trope of teenagers rebelling against the religion they are raised within, especially because more and more people are declaring their religious upbringing as a source of positivity. But this religious viewpoint is also balanced by some of the dangers it can possess when a trip to an ashram results in a sexual assault that he flees from. Symbolizing both strength and endangerment, religion is just another complication in an already complicated life.

Shame is another major theme throughout the stories, but again, I think that’s something that everyone can relate to, especially at that stage in one’s life. The protagonist seems to be preoccupied by this notion of shameful thoughts, and punishment is expected based on these shameful thoughts alone. He anticipates disappointing people; his parents, his cousins, even his own friends. These all-too-common feelings for this age group are reflected in both the illustrations and text, and I think the fact that this book has both will ensure it appeals to a wider audience.