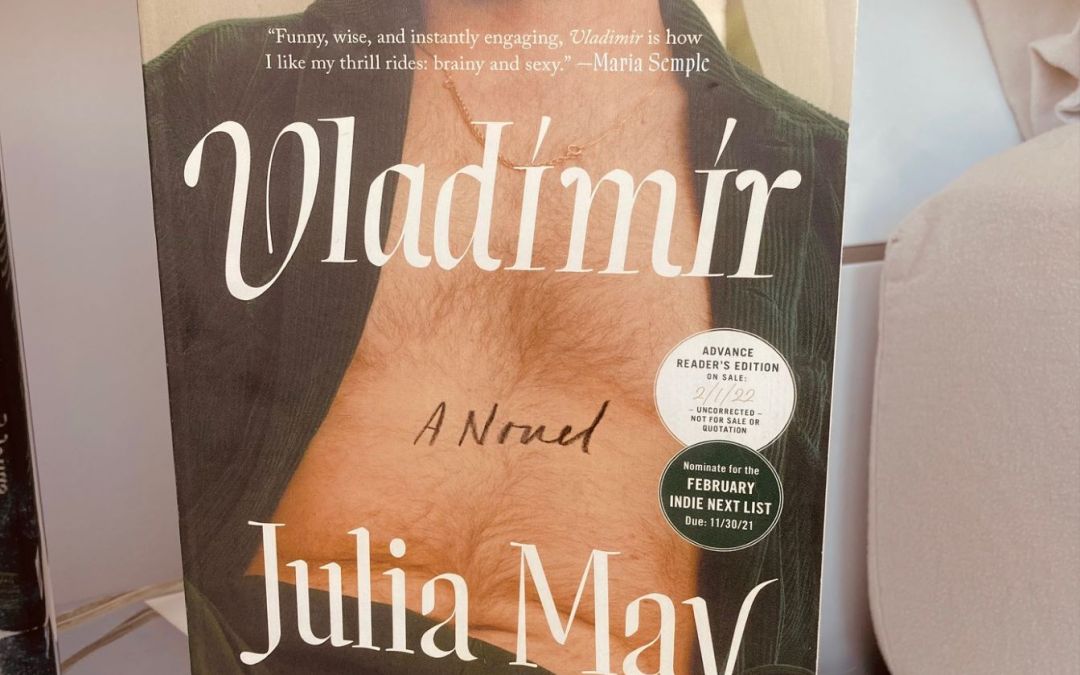 When I saw the cover of this book I was intrigued (and mildly grossed out?), but when I read the description of it, and the promise of sex scandals with professors on campus, I thought – sounds spicy! Perfect for this time of year when everything is melting, muddy, and generally dingy outside of my province too because as soon as I picked it up I began to notice it on the social media feeds of a vast array of readers. Is this a romance? Not really, but it certainly has some elements of romance and relationships in it. Instead, this book explores the impacts of desire, reputation, and age: each on their own, and how they influence each other when layered on top of one another.

Our narrator is a 50-ish woman, married to a man named John: both successful professors at a local liberal arts college. John is currently under investigation for having affairs with his students, and not allowed to teach while under review. They have an open marriage so this is not news to his wife, but she’s annoyed that it has become public knowledge and its affecting her own reputation. They’ve had a relatively happy marriage despite this, together for decades with one grown child, but once Vladimir Vladinski enters the story, our female protagonist struggles with the coolness and detachment she is known for, finding herself obsessed with this much younger, celebrated novelist and his beautiful but troubled wife. Painfully aware of her appearance at all times, our narrator is used to denying herself food, but Vladimir is one pleasure she refuses to go without.

Quotes on the cover of this book suggest this is a thriller, or at least include elements of one, but for those looking for murder or deadly deception, this is definitely not the read for you. Rather than including life or death situations that wratchet up tension, Jonas has chosen a much subtler threat: the shattering of one’s ego. Both our narrator and her husband were once highly regarded, but this scandal has altered their place in the closed society of their college. Young female students now view John as a predator, and his wife as complicit in his transgressions when she chooses to stay quiet. And the generational divide runs strong in this story; our narrator is constantly pointing out the differences between her own, and her students’ generation. She refuses to believe John was acting out of malice, instead she expects the women to admit their part in these consensual affairs. Peppered throughout her narrative is commentary on those younger than her:

“They brought us to our knees with their softness, their consistent demand for the consideration for their feelings – the way they could change all we thought would stay the same for the rest of our lives…and perhaps they would make a better world for themselves. Their aim was not to break taboos…no, they worked in a subtler and stricter way…”

She expresses similar sentiments throughout the book as she is criticized and punished for her husband’s behavior, but what is most shocking about this book, is her transformation into someone arguably even worse than her husband. Her actions and thoughts begin to spiral out of control as the plot deepens until it’s difficult to recognize her through the murky situation she has created. I read along somewhat helplessly, wishing I could put a stop to what was happening on the page in front of me, but of course, also morbidly fascinated by it.

In addition to the tensions between generations, this book also dwells on the power imbalance within a marriage. Who needs who more? Does one spouse always hold the upper hand because of their reputation outside of the marriage? Our narrator feels diminished as she ages, experiencing that common invisibility that once beautiful women go through, but the suggestion of Vladimir’s romantic interest suggests a re-awakening that offers her a respite, and turning of the tides in her marriage. Many of these questions remain unanswered even as the book comes to a close, but it’s still great fun in asking them.