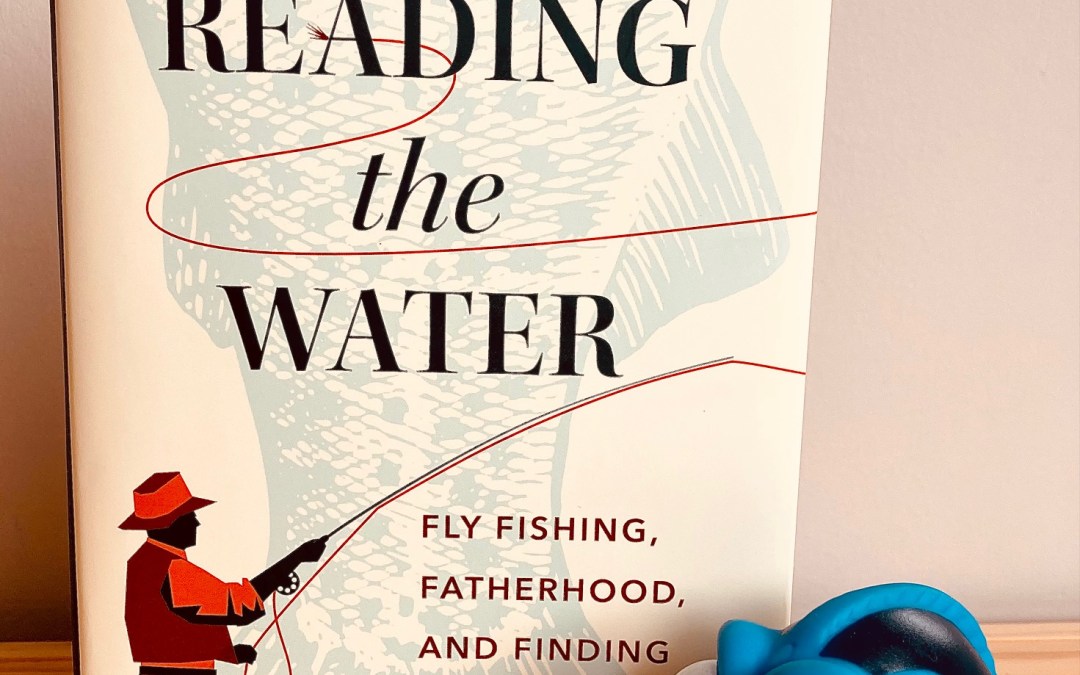 Fishing and fatherhood: two subjects I cannot relate to! But as I continue my search for the perfect book for Father’s Day, I can safely say that Reading the Water; Fly Fishing, Fatherhood, and Finding Strength in Nature by Mark Hume is the ideal gift for any papa in your life, even those who don’t regularly wield a fishing rod. Hume’s writing meanders through his own life, passing along lessons he’s learned from others in addition to some gorgeous meditations on the natural world around us. Finding pleasure in forested solitude is just one of the gems this book reminds us of.

Hume begins in his childhood; an idyllic picture of boyhood growing up in the Okanagan area of British Columbia, surrounded by acres of wild land and a safe home and family to return to every night after his outdoor adventures. But then they move to Edmonton Alberta, and the cracks in his family start to show, the marriage between his parents clearly crumbling. From there, he grows up and out of the home, working through a failed marriage of his own before his meets the love of his life and they have two daughters together, living back in British Columbia where his heart clearly lives. But all of these milestones of his life take a backseat to the real story of this book; his journey as a fisherman and the lessons that being out in nature has taught him over the years. Each phase of his life is marked by his proximity to a body of water and its influence over his habits. Now a father, his love of the outdoors is passed onto his daughters and he recounts formative fishing and camping trips they took together. Woven though these memories is the sad observations of climate change, and the detrimental affects of development that have taken severe tolls on the waterways of western Canada.

This book moves slowly through the life of its author and his family. We get glimpses into his childhood, but we don’t know much about his other four brothers, or the struggles his Father goes through as an underpaid journalist in Canada. We know nothing about Hume’s first wife, or what his day-to-day life looks like. Instead, we drop in and out of his life through his fishing excursions, which eventually include his kids as soon as they are old enough to carry a rod on their own. This isn’t to say he is an absent father, quite the opposite. His desire to keep them close, to maintain a connection with them even as they become teenagers and young adults is heartwarming to read about, especially as these opinions are so rarely expressed in print by men. At first glance it may appear as though he’s skipping over all the interesting parts of his life, but it quickly became clear to me that these moments hiking and fishing are the important parts for him, they crystallize his thoughts for the reader in the same way talking a walk outside can clear one’s mind. He balances these trips with short references to other major events, like having prostate cancer surgery, but even things as major as cancer are described in reference to his recovery outdoors, and how quickly he can get back out fishing.

This book didn’t get me excited to go fishing myself (I still prefer a good hike in the woods) but it did teach me quite a bit about why fishing is so appealing to others. All different aspects of the sport are dealt with here. For instance, fly fishers can indulge in a little arts and crafts project as they tie their flies to help catch the fish. These ties can be made up of any colour or texture, Hume mentions he ties some neon-coloured ones, but will also use scraps of materials from nature like feathers, even discarded fur from Indigenous crafters he purchases when travelling. He talks about the books he follows that outline certain patterns to follow when tying them, which pattern can attract which species of fish, and the late nights he’s spent tying patterns with his daughters, later becoming gifts they exchange together.

The pain that fish may potentially experience when being hooked in the mouth was another topic I found fascinating. It arises as he teaches his girls to release the hooks gently, as catch and release is something Hume advocates for, although he occasionally keeps fish to eat. He finds himself in a conversation debating the likelihood of whether or not the fish experience trauma as the lures are caught in their mouths, and together they decide it’s unlikely due to the fact that fish continually return to the same place mere moments after being yanked from that space by a sharp lure. It’s clear that minimizing his footprint in the wild is of chief concern, and we learn towards the end of the book that both his girls find careers in environmental protection of some kind, which is something he seems proud of, proof that the care he took with introducing them to nature was an important and impactful lesson.

A healthy respect for nature is all the prerequisite you need to enjoy this book, but I’m happy to say I learned quite a bit about a new hobby and sport too, which is always the hallmark of a great read.