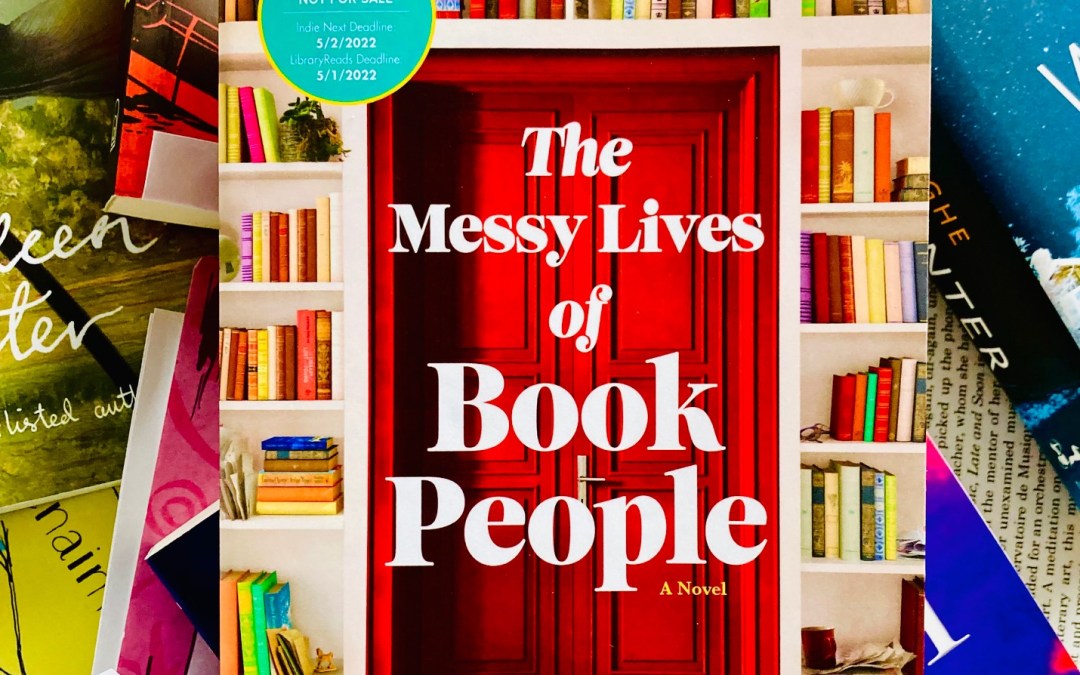 It’s a great title, right? It’s definitely one of the reasons I picked up this book about books, but I was quite pleased that this work of contemporary women’s fiction held my attention to the very end based on the character development alone. The Messy Lives of Book People by Phaedra Patrick is focused more on authors and the lives they live; the pressures of churning out thousands of words every day, and the downsides to creating characters that people become obsessed with. The protagonist is relatable too; a woman who people underestimate because she cleans for a living, and enjoys hiding away in a good book whenever she has a free few minutes. It’s a ‘feel good’ novel that surprised me in how invested I became in the plot, even though I guessed one of the twists quite early on.

Liv is a busy woman. She’s married with two older boys, and works three different cleaning jobs to help pay the bills. A bright spot in her life is one of those cleaning jobs in the home of the bestselling reclusive author Essie Starling, the writer of the book series Liv has been obsessed with since she was a teenager. Harbouring dreams of being a writer herself, Liv revels in her proximity to the woman who created the character of Georgia Rory, a fictional female that Liv finds great comfort in reading about every time a new installment is released. But when Essie dies suddenly and leaves some mysterious (and almost impossible to follow) instructions for Liv, she finds herself in a difficult position. Lying to her family and those around her in order to adhere to Essie’s last wishes, Liv begins to act like a different woman; making extravagant purchases, dressing in Essie’s clothes, even forcing her way into situations she would never dare to enter previously. Liv relies on the fictional bravery of Georgia Rory to get her through the difficult months after Essie’s death, but as she digs deeper into the reasons for her secrecy, Liv begins to question the talent and intentions behind her favourite author.

This was a fairly light and well-paced read that suited my summertime state of mind quite perfectly. Liz is a character that any bookworm can enjoy following; she gains her strength from the heroines in-between her pages, and there are frequent references to her emotional reading – when she is stressed and looking for comfort, she turns to her favourite re-reads, but she’s also excited to explore recent releases. She even listens to audiobooks as she cleans, so she incorporates her love of reading into all aspects of her life. Throughout this novel are references to real books that most bookworms will remember, many have been published in the last two or three years, so I felt part of this inner circle of book lovers whenever I recognized the book that Liz was reading on that particular day.

There is an inherent power imbalance at the beginning of the book; Liz as the cleaner with money problems at home vs. Essie the rich and famous novelist. But when Essie dies, Liz begins to realize a) how underestimated she is, and b) how lucky she is to have the family and husband she does, even when they are actively underestimating her too. As Liz learns more about herself and the talents she possesses, there are some in her life who are unwilling to change their view of her, while others may need some coaxing (i.e. her husband) but come around eventually to the ‘new’ Liz. This development is contrasted with the character of Essie who was forced into a box, and never able to emerge from the expectations of others. Liz catches glimpses of the difficulties Essie endured as a celebrity, especially when it came to the obsessions of Georgia Rory fans, as many seemed unable to separate the author from her famous character. Most disturbingly, some people were unable to see Essie as an actual human being, instead a vessel from which these bestselling books came from, or a mere shadow of the character she created. Actually, more even more disturbing than that was the amount of fan mail made with cat hair that Essie received – yikes!

There’s not much to complain about with a book like this; great characters, tidy plot, and lots of book references to indulge in. Yes I figured out the big reveal quite early on, but this didn’t diminish my enjoyment of Liz’s story. It also gave me a greater appreciation for the incredible amount of work that goes into writing a book, and the often glamorized but rarely glamorous life of a famous author. Many will devour this book in a few hours or days, it’s perfect for this summer’s beach or rainy day read.