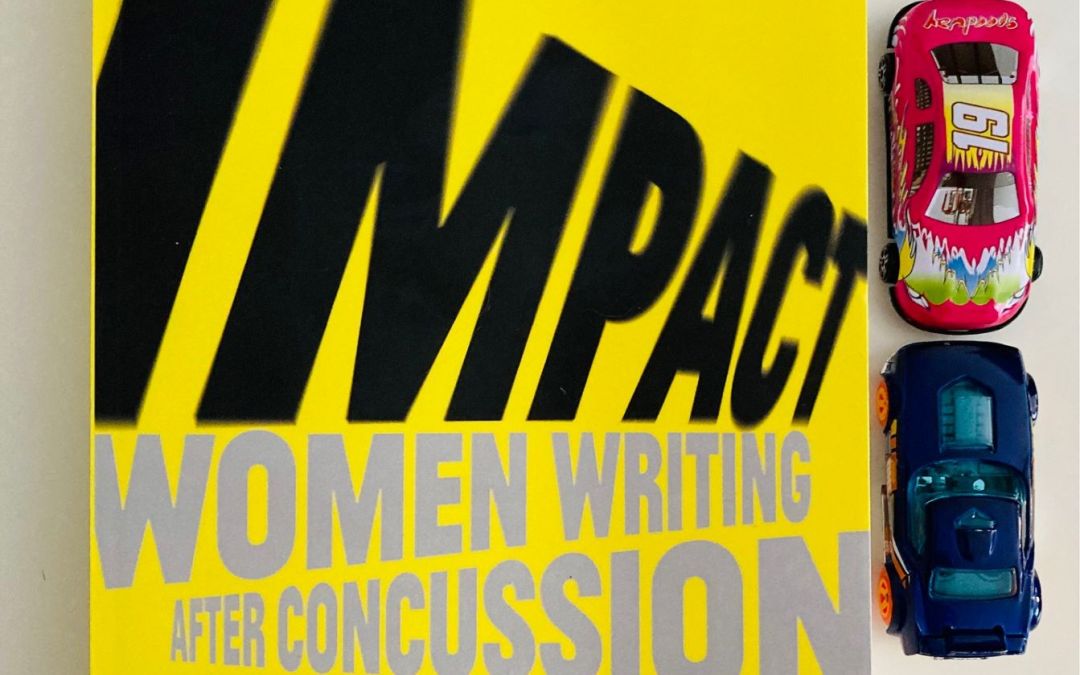 Anthologies aren’t typically my thing, but I’ve kept an open mind lately, and this book came across my doorstep as I was a judge for the Alberta Book Publishing Awards a few months back. Impact, Women Writing After Concussion, Edited by E.D. Morin and Jane Cawthorne is a self-explanatory title, but why this book is so critical is because there is very little research done on how women experience concussions, as oppose to men. Lots of money goes into researching and treating men’s concussions, mostly through sports-related funding, but women experience concussions differently and this is an area of medicine that clearly needs more attention, as these stories highlight.

21 female writers tell us the story of their concussions. What’s surprising about many of these stories is the very benign, undramatic way the concussions happened. In fact, many of the women who were later diagnosed with a concussion didn’t think they had hurt themselves seriously, or even hit their head at all. The majority of these recollections are written in clear and concise prose, but there is a series of poems spread throughout the book that also define the experience of working one’s way through a concussion. One piece is a one-woman play that reads like an artistic monologue, with an author’s note at the end. The frustrations and misconceptions around concussion is the common thread that runs throughout; fear of the unknown and the constant misdiagnosis from doctors, physical and cognitive symptoms that make an everyday life grind to a halt, the anxiety of pausing work and social commitments, the guilt of withdrawing from one’s family.

Although this clearly isn’t the point of the book, I couldn’t help but feel both relief that I have not had a concussion yet (they are cumulative) and anxiety that myself, or those I love may experience one. One story is of a mother who has experienced concussions herself, and then her teenage son has one and his entire personality changes, he becomes angrier, and suicidal thoughts begin to enter his mind -from a bump on the head by a soccer ball! Most of the women featured in this book seem to wholeheartedly agree that concussions change a person mentally. They may not seem different to those on the outside, but they know they are a changed person, with slightly different reactions, emotions, or personality traits that have emerged since their accidents.

Each essay has a wildly different ending; some of the authors emerge hopeful from their ordeal and proud they have survived it, while others openly admit to feeling lost and depressed. Feminist and activist Judy Rebick points to the precariousness of her income (she’s a writer, and therefore her projects are paid out when they are done) and the fact that many people who are homeless are suffering from brain injuries themselves. There is very little buffering her from the dangers of being forced onto the street or to unstable low-cost housin, as many of the treatments required to heal from her concussion aren’t covered by our healthcare system. Although having a modest income as a writer may seem a liability to some, other women used their talent with words to help them heal; Anna Swanson took to swimming each morning outside, afterwards picking up a few pieces of trash and creating new phrases from the packaging to help exercise her creativity in a limited way. As a reader, I oscillated between so many emotions as I read this collection; fear, pity, anxiety, hope, and awe of the strength displayed on these pages.

Many caregivers will relate to the anxiety in these stories. Most often, when we are told we have to slow down and drop a bunch of commitments, we think of all the people we are about to let down (or is this just me?). The idea of not being able to drive, cook and work terrifies me, but I’m lucky to have a partner who can take this on if I’m ill – but what about all those women who are going it alone? Who are responsible for the life of another – who will help them and take over that care? This is a fear that’s reflected in the book, and one many female readers will be able to understand as our gender is overwhelmingly cast in the caregiver role most often.

This may not be a collection that one is excited to read, but it certainly helped me empathize with others who have had concussions, while simultaneously making me grateful for my own brain health. I’d certainly recommend it to anyone who has a person in their life suffering from concussions, or had one themselves.