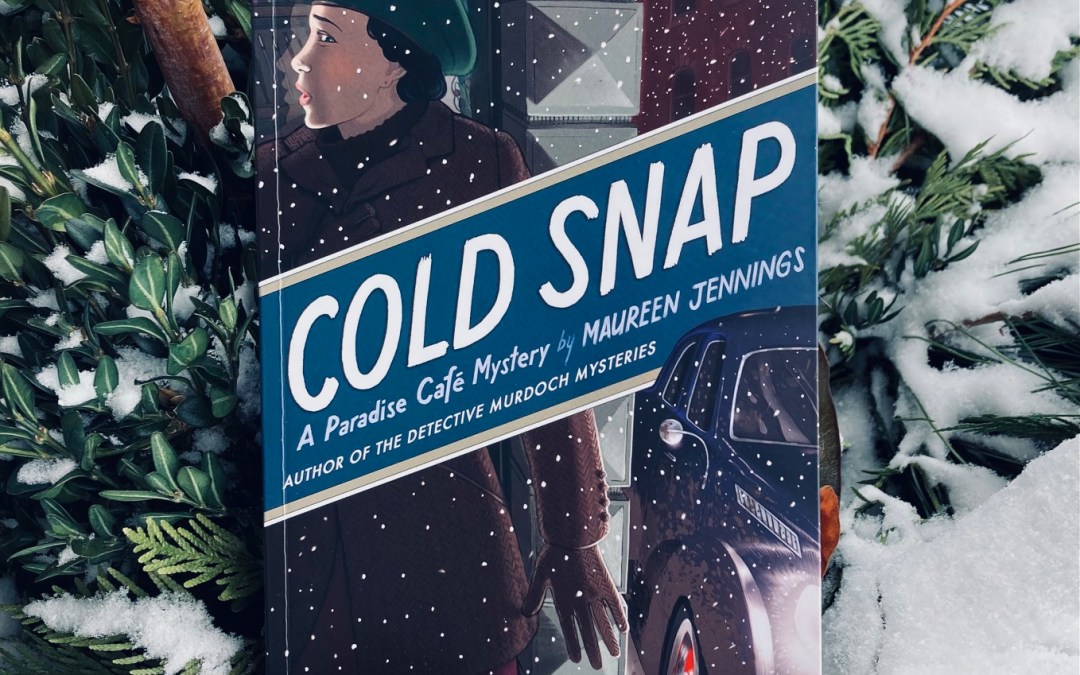 Just in time for Christmas, I received the third and latest installment in the Paradise Café Mystery series, Cold Snap by Maureen Jennings. Although not truly a holiday tale (it’s quite dark) it does happen to take place right before Christmas, and as I read it, Calgary was experiencing its own cold snap, so it felt like the perfect time to dive in. What’s better motivation to stay in and snuggle up under a blanket than cold weather? Not much. And in case you’re wondering HOW cold it is here, I’ve got a picture of the inside of our window to give you an idea…

It’s 1936, and private investigator Charlotte Frayne continues to impress as she solves crimes, takes care of her aging Grandpa, and enjoys a steady romance with Hilliard Taylor, one of the owners of the local Paradise Café, which offers meals to those who can’t afford one otherwise. Charlotte’s boss Mr. Gilmore has assigned her to a new case – keeping an eye on a friend of his newly arrived in the city, Stephen Lucas. Details of his past and reason for being in Toronto are elusive, but wherever this man is, trouble seems to follow, as does a line-up of dead bodies. At the same time Charlotte is also approached by a new client, her long-lost mother, who gave her up when she was young, and has returned to ask Charlotte’s help in finding her other child – a son she gave up for adoption a few years after Charlotte. Putting aside her mixed feelings about this latest assignment, Charlotte moves between both tasks with skill and grace, annoyed that people seem to be keeping secrets from her, but eager to go out of her way to help others whenever possible. In the background is the increasing secrecy swirling around Hitler’s Germany and what the rest of the world knows (or doesn’t know) about what’s going on inside its borders. Many are still recovering from the Depression, so tensions remain high, creating the perfect atmosphere for this complicated mystery.

I read the first in this series and really enjoyed it, so it’s no surprise I raced through Cold Snap as well. Jennings is the well-known author and creator of the beloved Canadian book and television series Murdoch Mysteries (now in its 16th season!), in fact the titular Jack Murdoch also appears in this book too, occasionally working alongside Charlotte to help her solve her cases faster. This author is more than familiar with how to build a thoughtful mystery, but I get the sense that this latest series is a chance for her to explore her characters more deeply. This particular plot isn’t so much about the ‘whodunnit’, as it becomes clearer and clearer who the culprit(s) are as we move along. Instead, secrets from all sides are slowly unraveled, not just sinister secrets either, but secrets meant to protect others. When we finally do discover the party responsible for the dead bodies, it’s not a feeling that produces a satisfying ‘gotcha’ moment, as there are many sides to the complicated motivations behind these crimes.

Charlotte is a character ahead of her time. The very fact that she’s not married and works full-time is rare, and because she’s in a male-dominated industry, her personality must match her skills, so she’s happy to live an independent life and solve crimes to fill her days. Her beau recognizes her independence, and doesn’t force her to stick close to him either, so she’s seemed to find a match that respects and recognizes her personal goals, which again, doesn’t seem all that common in the late 1930s. This latest installment continues to develop Charlotte’s character when we meet her mother, and true to Charlotte’s nature, she is guarded against this new woman’s entry into her life, and not altogether pleased that money seems to be a big motivation for her mom’s desire to find her long-lost son.

In addition to Charlotte’s personal life, tensions outside of her control continue to brew, and I found it most interesting to gain the perspective of what life in Toronto at that time would have been like. The situation in Europe is clearly on people’s minds, but their knowledge of what’s truly happening is quite limited, and when major situations do occur, it takes so long for news to reach them that communications in developments are quite delayed. Nowadays there is much discussion around ‘fake news’ and a mistrust of media, that I found it quite comforting to know that even back then, there were similar challenges. Instead of the firehose of information and perspectives we are now faced with, back then they only received dribs and drabs, and many were still disbelieving, so as much as this work of historical fiction highlights the differences in our society, it seems much still stays the same as well.