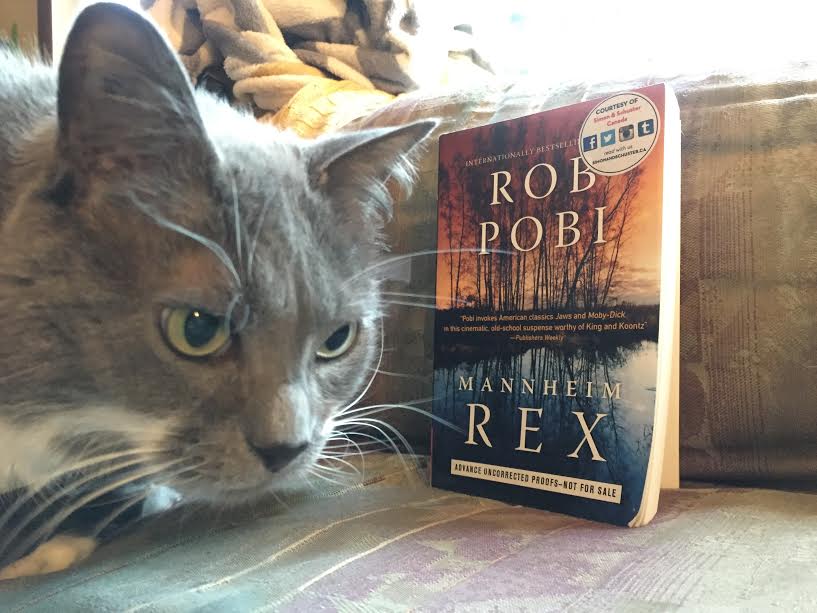 I was lucky enough to spend my childhood summers next to a lake; I swam in it, lay beside it, snorkeled around it, boated over top of it, and even constructed my own little wading pool on the shores of it. But when I would dive down deep to get a better look at something, I always got a little creeped out as I stared into the murky water where the shore dropped off. I definitely read too many books back then so my imagination always ran wild with the possibilities of what could be staring back at me. Robert Pobi’s book Mannheim Rex explores just that-the story of a medieval, horrifically large creature that is terrorizing a small town lake and its inhabitants.

Many have classified this as a horror or suspense novel, and it definitely has elements of both. We begin by meeting Gavin Corlie, an incredibly successful horror writer whose wife has just died. To escape his painful memories he moves to a small town called New Mannheim where he befriends a terminally ill boy named Finn who is obsessed with fishing. Corlie also falls in love with Finn’s doctor Laurel, and when you are rich, people fall in love with you quite easily too, according to this somewhat unbelievable aspect to the story. So while these new relationships are blooming, people are still dying mysteriously in this town, but their crooked, drug-addled pedophile murderer of a Sheriff is covering it up, simply because he’s lazy and doesn’t want to have to deal with the bodies that have huge chunks bitten out of them.

What did I like about this book? I really enjoyed the premise and the pacing, and the personal story lines around Corlie served to break up the encounters with the giant fish-thing, adding to the suspense but giving the reader a comedic break on a regular basis. Finn is a really fun character; although he’s dying he’s got a whip-smart sense of humour and his presence elevates all the other people around him plus he adds much-needed depth to the plot. I also really enjoy reading fictional stories about the publishing world, being a writer, etc. I think this is because I used to work in publishing, so I GET IT. Those of you who work in publishing will know what I mean.

There were a few things I didn’t like about this book.  I mentioned that some of the human to human interactions were unbelievable (mind you, this is a horror novel, so I can easily let this slide), but I really didn’t appreciate the overall portrayal of women. There were very few, and the ones who were included fell into two categories; potential sexual partners or ‘balls and chains’. Sigh, I realize that this can be somewhat common in this genre, and it shouldn’t deter you from reading this book but I’ll never tire of pointing out the lack of strong female characters in any story that I read because I always think it is worth noting.

Other than my above complaint, I really enjoyed Mannheim Rex. I’ll leave you with an eloquent quote from the first page that accurately depicts the rest of the writing in the book, just as a teaser:

“he had fished this lake long enough to know that when it came to weather, shit went mother-in-law ugly real fast out here” (p. 1).

You’re welcome (and apologies to my mother-in-law).