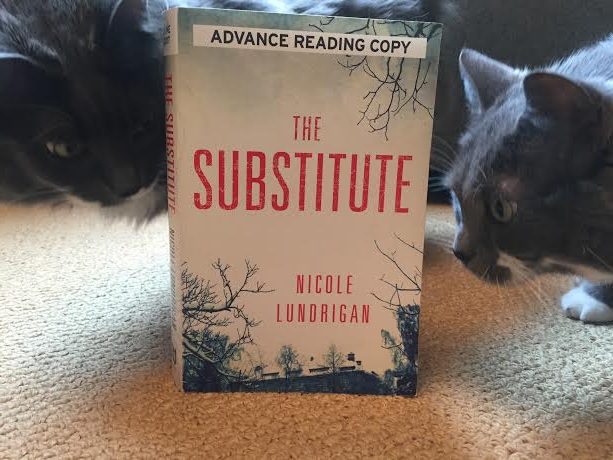 Ah yes, the psychological thriller. They seem to bloom like dandelions in the summer, don’t they? One after the other, it’s hard to keep track of where they are coming from, and why are there so damn many of them? They’re definitely a trendy genre right now; with the popularity of Paula Hawkins, Gillian Flynn and Ruth Ware there are many authors who are jumping on this bandwagon in hopes of tasting similar success. But many of these extremely popular books can turn off the typical crime fiction lover, simply because they tend to be very commercial (read: simplistic and unbelievable). There’s nothing wrong with that, in fact I really enjoy it myself, but I’ve found a book that will appeal to those who enjoy a more character-driven plot.

The Substitute by Nicole Lundrigan is a study in character, first and foremost. It alternates between the perspective of an unnamed (and ungendered) psychopathic teen, and an awkward substitute science teacher named Warren Botts. A few pages into the book we learn that Botts has had problems with a student showing up at his house wanting to discuss her marks, her family, etc and then she shows up dead, hanging from a tree in his backyard.

The chapters that were told from the perspective of the psychopath were fascinating, if not extremely depressing. Not surprisingly, this person has a terrible and difficult childhood (yes, it’s always the parents fault, in case you were wondering). But Lundrigan deftly paints the portrait of Botts’ similarly difficult childhood in a parallel fashion, so at some points, it almost seemed as if both characters were the same person. But then, tiny, easy to miss clues are dropped, and those of us who are feeling particularly clever could begin trying to put together the puzzle. I personally don’t like too think too much when I’m reading like this-I’ll pause for a second to digest what I just read, but I try to slow down and just read the words for what they are, rather than frantically try to figure things out as I go along.

Regardless of how you read your mysteries, this is a satisfying one. And despite the fact that I don’t dissect the plot as I go, I did guess who the killer was about 2/3 of the way through (I’ve watched ALOT of Murder She Wrote) but I was still pleased with the ending. Based on the reviews on Goodreads, most people were shocked by the ending though, so don’t let my experience scare you off. This is a great read, no doubt about it.

So what do you think, are you sick of the psychological thriller trend, or are you excited to get the jollies scared out of you again this summer?