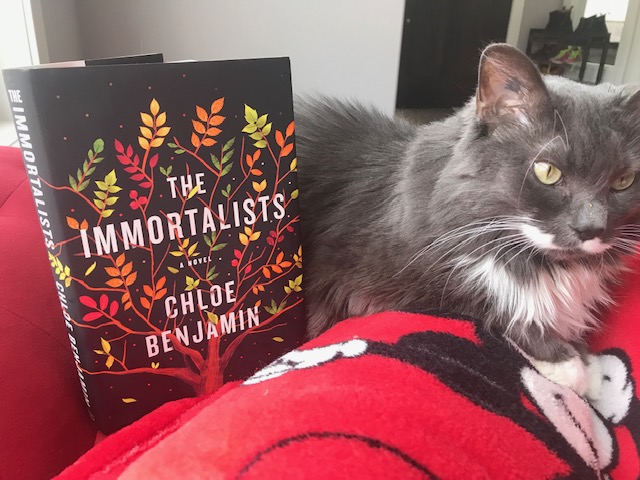 Before I started reading The Immortalists by Chloe Benjamin, I assumed it would be a boring, literary book about the meaning of life. Even though it had won all sorts of positive attention, I wasn’t sure it was for me. Now that I’ve read it, I’m pretty confident it’s going to be one of my favourite books that I read this year.

Four siblings visit a psychic who is rumored to have the ability to predict the date of one’s death. Each kid speaks with her individually to learn their fate, and they don’t share their ‘dates’ with each other after they leave. Following that momentous occasion, the book splits off into four different sections and we inhabit the mind of each person individually as they tell their story. Through these accounts we learn whether or not the predictions come true, and how the child (and eventual adult) decide to work towards or against that specific date.

Now this is very much a literary novel, it’s certainly not a suspense or thriller, we are living primarily in the characters’ minds. However, the lives and deaths they experience are quite dramatic, and I found myself physically tensing up, heart-pounding as I neared the end of their chapters. Benjamin has taken the both of best worlds here; her characterization is such that we truly care about each character, even if they’re doing stupid or mean things, but her plotting presses us forward surprisingly quickly, so there weren’t any moments of boredom even when nothing much is happening. Their circumstances are what draws in the reader, and the dread of a potentially early (or predictable) death is what keeps us turning the pages, the pit in your stomach getting bigger and bigger as we near their ‘date’.

There was one line in particular that gave me pause because it articulated a thought that I’ve never come up against in any of the books I’ve read, but it immediately seemed familiar to me all the same:

She understands, too, the loneliness of parenting…to know that she connects a future unknownable to her parents with a past unknowable to her child” (p. 134).

Throughout the sibling’s lives they keep coming back to their childhood, recalling how they related to each other, how they viewed their parents, and their life as a ‘whole’. Although this is totally unrealistic for normal people, one can’t help but wonder how life would change if you knew the date you would die (or at least suspected you would die). I think it would be easier to see life as something you do if it felt finite, as it most likely does for these characters. Therefore the musings (like the quote above) seem much more understandable and meaningful when they’re brought up in this story; everything is steeped in importance when you’re days are a countdown.

Grief is another major theme in this book, and for that reason I think many people will find solace in this story. Even though there is death, it’s a comforting kind because we’re faced with it so early in the novel we’re expecting it…but I still got sweaty palms in some parts. So how’s that for a recommendation? If you’re still curious, come to the We’ve Read This book club on February 27 for a sure-to-be lively discussion about this one.