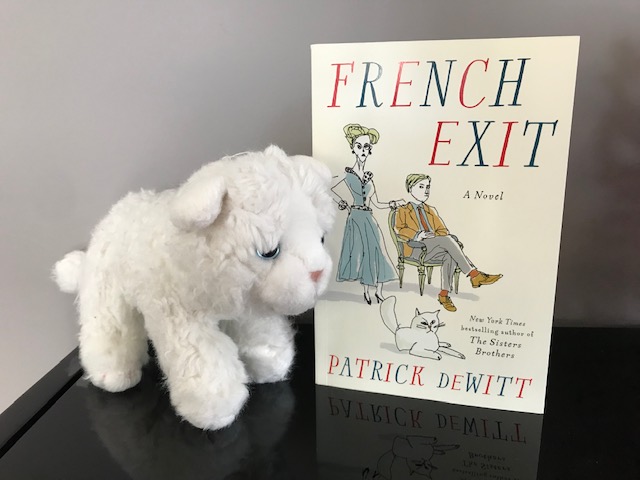 I adore this book. I knew I would, there’s a cat on the cover and I heard Patrick deWitt read from it during his Giller event here in Calgary last year and the section he read was HILARIOUS. Luckily the rest of the book lived up to his stellar performance, and I think I’ve found one of my favourite books of the year.

French Exit was published in 2018, and was shortlisted for the Scotiabank Giller Prize that same year, receiving numerous other accolades since then. It’s about an extremely wealthy family; the matriarch, Frances Price, her adult son Malcolm and their cat Small Frank, whom they believe to be the reincarnated spirit of Frances’s late husband and feared lawyer Frank Price. At the very beginning of the book it becomes clear that their fortune is now gone, having been wasted on foolish purchases over the years. Fleeing Manhattan for a friend’s apartment in Paris, the mother and son duo (think Lucille and Buster Bluth) find a new network of ‘friends’ to settle in with while they grow accustomed to their new, modest lifestyle.

I can’t be the first person to make this lame joke, but I believe deWitt is one of the best authors at conveying ‘wit’ in his characters. (I’m here all night folks!). The banter between Frances, Malcolm and their acquaintances is what makes this novel so spectacular, but the timing and bluntness of even the cursory characters is well done. The dialogue is hilarious, prompting many chuckles and laugh-out-loud moment as I made my way through this woefully short 244-page novel. I rarely state that I wish books were longer, but in this case I did because I wanted to read about these two characters for as long as possible.

Frances is by far my favorite character; even though she behaves despicably for the majority of the book, her glimmers of kindness are still believable, endearing the reader to her even more. Frances and Malcolm attract a few hangers-on by the end of the book, despite the fact they are now broke and still rude the majority of the time, but like us readers, people around the duo can’t seem to get enough, even if living in their company is difficult. For some reason, it all seems worth it, just to exist in the orbit of these two, and although I have hindsight and some distance, I must admit I would probably find myself in the same position as these Price fans.

Most of deWitt’s books (if not all of them) have a very similar feel, and that is the blend of dark and light, humour and violence. Similar to a Quentin Tarantino movie, the characters are all delightfully entertaining even though they live somewhat sad or disturbing lives. I can include all the Arrested Development GIFs that I want in this post, but it doesn’t take away from the fact that some terrible things happen in this book as well. Like all good WASPs, Frances and Malcolm keep their emotions in check until cocktail hour arrives, and even then we can only tell how upset they are based on how much liquor they decide to indulge in. No doubt that the further I get into this review, the more obvious it becomes as to why these two are so popular among their social circle.

Patrick deWitt novels are great books for so many reasons; they’re enjoyable to read (the most important reason to read any author!), they deal with serious subject matter with a light touch, and you feel as though you have lots to ponder and analyze at the end, if you’re inclined to do such things. No judgement if you’re not into that, but as a book reviewer, it’s kinda my job, and deWitt makes it easy. Another reason to read this book? It’s the We’ve Read This book club pick for May-register here.