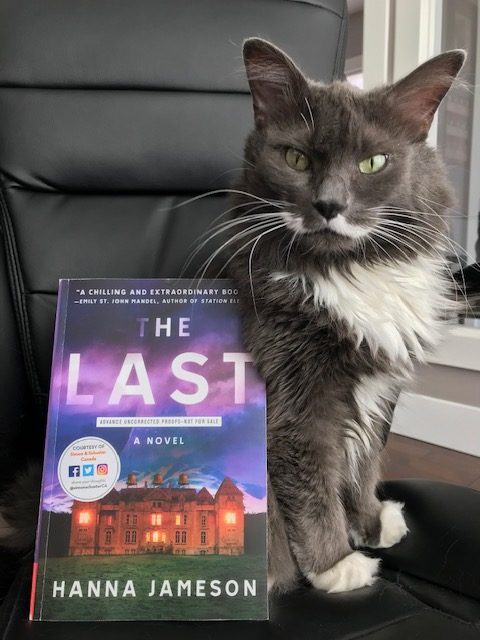 Well I read this dystopian novel in an attempt to get my mind off politics (there was a provincial election going on earlier this year) but I quickly realized this book is mired in them; it’s not so subtly hinted at that a certain American President is responsible for a nuclear attack that ends the world. You know who I’m talking about, and I’d rather not repeat his name here if I don’t have to. It rhymes with dump…

Anyway instead of being whisked away to an alternate reality that didn’t resemble ours at all, Hanna Jameson has created a world very much like our own in her book The Last. I know I’m not the only person who has pondered what it would be like/what we would do if a nuclear attack happened. Jameson has created an extremely realistic picture of what it could be, starting with the fact that we would hear about the attacks through the social media feeds on our phones-of course we would! I’d be on twitter, most likely.

We witness the end of the world through our protagonist Jon’s eyes; he’s in a secluded hotel in Switzerland at a work conference when the attack happens. After the majority of the guests leave, he’s left in this cavernous space with around 25-30 people, although those numbers begin to dwindle for various reasons. He keeps a diary for posterity as he is a historian, and he also holds out a tiny bit of hope that he may be reunited with his wife and two kids once the initial panic and widespread death subsides. Luckily there are a significant amount of supplies left at the hotel, so even after a few months there’s enough food and water to go around. In addition to those practicalities, we also discover that there’s a stockpile of guns for hunting, but some of the rifles have gone missing. On a water-purification expedition to the roof’s water tanks, Jon discovers the dead body of a young girl, and suddenly everyone is a suspect in the death of a young child. Could things get any worse? This is a thriller, so yes, they certainly could, and they do.

I really liked this take on the end of the world because it addresses so many questions I had, like what would it be like with no internet? At first they have shoddy reception, but once everyone’s cell batteries die, and the generator loses its juice so nothing can be recharged, their contact with the outside world is cut off completely. Plus, they’re afraid to travel any significant distance because the fear is that the closer to the city they get, the more likely there are hungry and starving mobs. They see some downright depressing things on the roadside on their way to a food store to scavenge for medicine, and there’s no doubt that things are getting worse elsewhere. Suicide seems to be the only way out for many, but Jon becomes obsessed with finding the killer of this little girl so we continue with him on his fact-finding mission while people fall apart around him. And to answer my second question of ‘what would one do with the uncertain amount of time left’ the answer is: drugs, sex and alcohol. Again, I imagine this is a realistic reponse all things considered.

Jameson’s efforts at realism are obvious throughout all aspects of the book. Most of the characters are unlikeable, but again, they are all under enormous amounts of pressure, suffering from frequent panic attacks if they can manage to leave their room at all. We literally see the worst of humanity-not the Lord of the Flies type of worst, but people just acting badly towards each other, suspicious of everything and incredibly selfish. There are a few interesting and short-lived discussions about philosophical ideas such as what people live for, how a democracy should truly work, when and where judgement is warranted. But for the most part, the book is driven by a twisty plot with a suffocating amount of dread mixed in. Dread because you know a happy ending is pretty much impossible, but dread because you can also see how close we could be to this fiction becoming a reality.