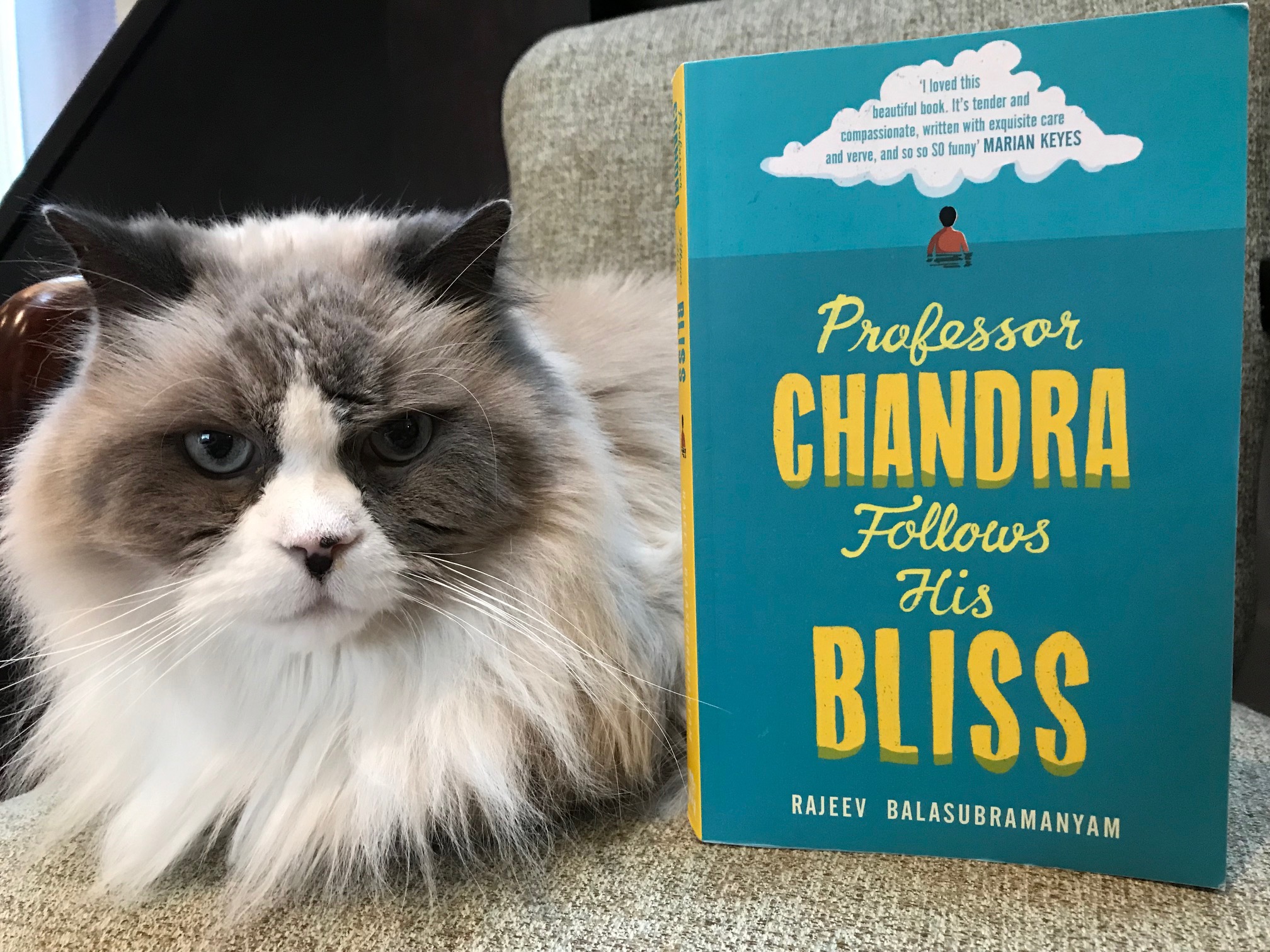 Based on the cartoon-like cover, and the back cover stating “2019’s most uplifting read”, one would expect Professor Chandra Follows His Bliss by Rajeev Balasubramanyam to be a certain type of book; one that features a helpless and bumbling protagonist that falls apart at the beginning then eventually comes to see the error of his or her ways during a heart-warming conclusion. This is of course a generalization, and to be perfectly honest I love these kinds of stories, even if you can guess the ending. But this book is simply disguised as being straightforward, it’s actually an in-depth study of characterization and an attempt at wading through the complicated generational divide our western society struggles with.

We are introduced to the book’s namesake as he dines at a prestigious and wealthy colleague’s house, discussing economics over silverware and white tablecloths. Chandra is described as a very stereotypical upper class man; proud of his success, always ready to pass judgement on others lest they appear not as hard-working, and quick to use the economy as justification for just about anything (do I sound bitter?). He’s devastated to learn he has once again been passed over for the Nobel Prize in Economics, then he gets hit by a bicycle. These two incidents prompt him to take a bit of a break, something he’s very uncomfortable with and not used to doing. No longer able to rely on work to fill his hours, he’s faced with the notion that his personal life is is really where his focus should be.

At its heart, this book is about family. Chandra and his wife split up after having their third child, Jasmine, unexpectedly late in their marriage. His wife Jean leaves him for another man, moving from the UK to America with Jasmine in tow. His first two kids are now adults; Sunny is living in Hong Kong intent on outearning his father, and Radha has cut Chandra out of her life so he has no idea what continent she’s even living on. The rest of the family knows where Rhada is and remains in contact with her, but are sworn to secrecy much to Chandra’s anger and resentment. Once Chandra’s focus swings back to his family he decides to fly over to the U.S. to re-connect with Jasmine, then continue westward to Hong Kong to see Sunny. On the way, he makes a pit-stop at a spiritual retreat in California, forced into an uncomfortable workshop out of pride and spite.

Although it seems like this book is ripe for cliches, it really isn’t. Nothing is black and white; at times Chandra says and does awful things BUT he is also an extremely empathetic character because even though he does ‘bad’ things as a parent, he does ultimately love and care for his kids. Nothing is simple about his failed marriage either; the dissolution of their relationship may seem like Chandra’s fault at first, but Jean cheats on him, marrying Steve, a man who turns out to have his own annoying set of problems vastly different from Chandra’s. And the problems between him and his children are typical, their back and forth will sound familiar to many, but everyone will side with a different character based on your existing world view. Do people’s opinions and trajectories change throughout the book? Not really, but that’s what makes this story so realistic. Chandra doesn’t go through an obvious metamorphosis, but instead he experiences some unique situations that help him understand his family, and himself, a little more.

Despite all this serious soul-searching, the book maintains a healthy dose of humour throughout the story’s arc. Chandra’s voice (inner and outer) is sarcastic, witty and sharp. Aside from a few barbs that others wedge into conversations, Chandra dominates the narrative with his presence; he’s a narcissist, and the reader is never able to forget it. Luckily, his softer side does shine through, and his quips are regular and relatable, so we’re able to forgive his rough edges in favour of his esteemed company for the entire length of the novel. Not necessarily the all encompassing ‘feel good’ novel I was expecting, but an enjoyable and thought-provoking read nonetheless.