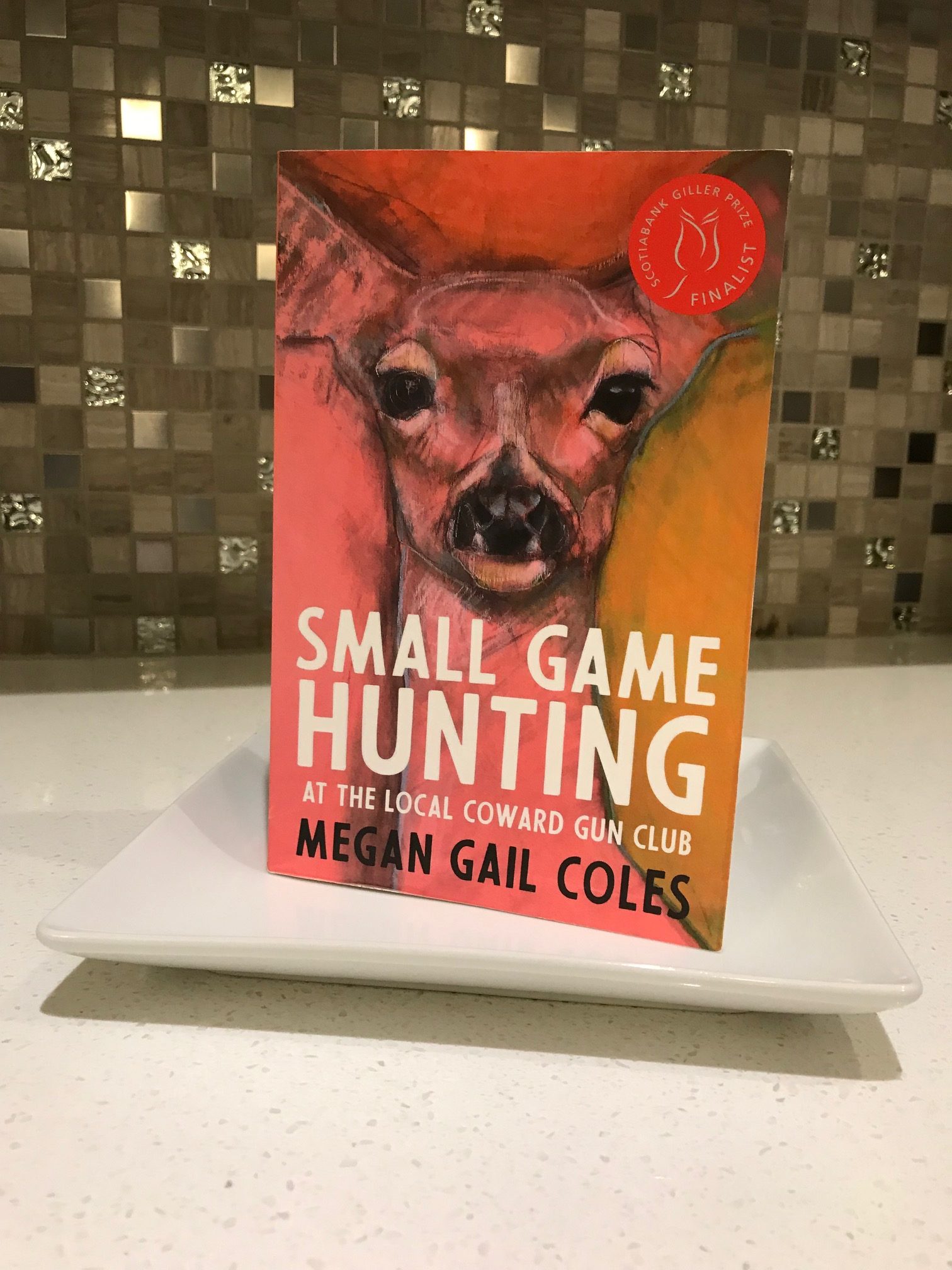 Long title, long book. Small Game Hunting at the Local Coward Gun Club by Megan Gail Coles may scare off people for a few different reasons, one of them being the warning issued at the beginning:

But those who are brave will be rewarded. I won’t say I was one of the brave ones, I HAD to read this book because I’m defending it for the Giller Light Party next Monday, but I’m glad I did anyway because it was a worthwhile read. Not an altogether pleasant read, but a memorable one. It’s a book I’d recommend to others, just so they can see how other Canadians live. For someone who lives in Calgary, this book introduced me to a whole other side of Canada I’ve never experienced, but of course, I’m now dying to visit myself (in summer).

The story takes place on Valentine’s Day in St. John’s Newfoundland. (Note for my non-Canadian readers: I’m a Canadian born and raised, but I’ve never been to Newfoundland, many Canadians haven’t. It’s a large island on our east coast and can be quite expensive to get to, although boasts some of our most beautiful landscapes. It’s also considered one of Canada’s more ‘rugged’ urban areas.) Coles is aware that her book may be an introduction for many to this area, yet doesn’t sugarcoat how brutal it can be in the winter. Biting cold and unceasing winds along the coastline is just the beginning as to why this area may seem uninhabitable in the winter months.

We’re introduced to quite a few characters who we jump back and forth between. One man is cheating on his wife with an employee, another man is trying desperately to be the good person his mother raised him to be, and one woman is struggling with the painful imprint of a childhood in foster care, steering her into the arms of all the wrong people. Drugs and alcoholism rear their ugly heads throughout most of this narrative, making already intolerable situations even worse. Like the title suggests, the weak are preyed upon by those who should know better, empathy an emotion that is pushed out of the way by more pressing matters. Women suffer the most in this book, but machismo rather than men are the target of Coles’s scorn. And most bad deeds germinate out of earlier abusive treatment or resentments; many seem to be struggling with significant burdens: emotional or otherwise.

But it’s too easy to draw character lines as us vs. them. One of the ‘villains’ of the book, George, is actually the woman being cheated on, and she seems to lack almost any empathy at all. But instead of pointing out the differences between her and Iris (the mistress) we realize both women (and to some extent the men) are being shaped by outside forces; some have a safety net while others don’t. George is incredibly rich, so she has a safety net, although she’s prey to society’s expectations all the same:

“Her father remarked that she was much too stern. Be like that if you want, my girl, but you will be alone. So she softened. Made herself sweet. Wore pastels and said please (p. 121)”

Bloody good that did her! But again, I think that’s Coles’s point, these are expectations that are placed upon us for no good reason, with no guarantee of happiness at the end.

The only problem I had with this book is the number of characters; as I started reading there were far too many for me to keep track of and their stories started to blend together. Once I settled in, I was able to follow the perspective changes clearly, but I find this initial confusion frustrating and avoidable as a reader. That’s a small quibble for an otherwise thought-provoking read, and for those who worry it may be TOO dark for them, there are moments of humour to lighten up most scenes. I recommend listening to interviews with Coles so her voice is well-imprinted in your mind before you begin. I held her voice (with its Newfoundland accent) in my head as I read, and it added a colour to the writing that made the words even more vivid and provocative. I’ve got my fingers crossed this wins the Scotiabank Giller Prize on Monday!