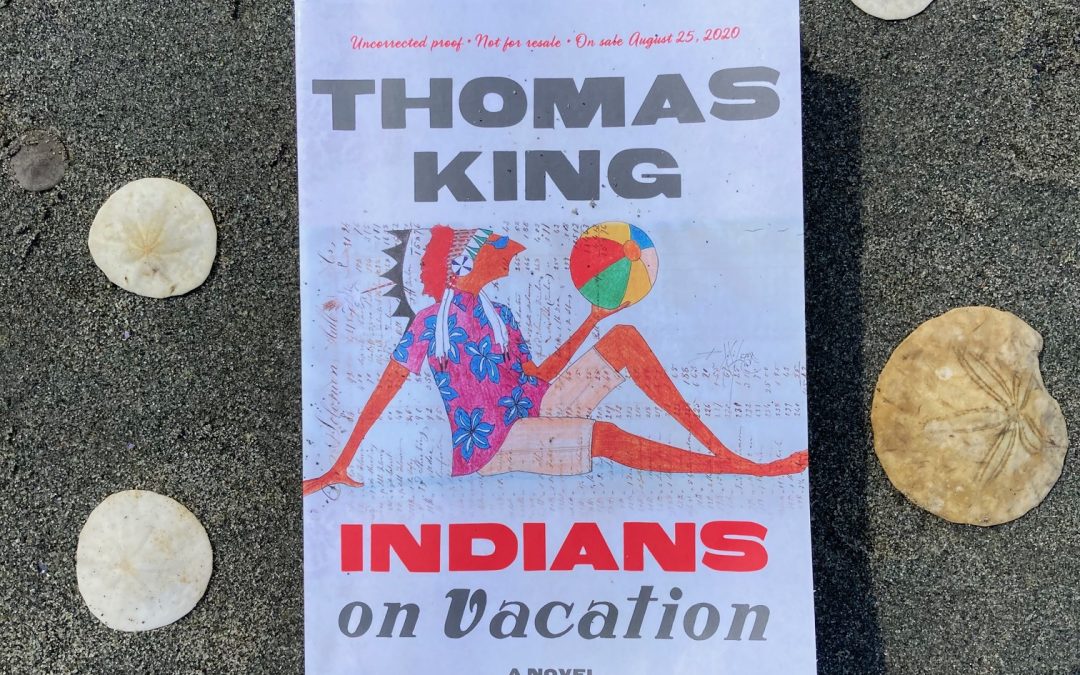 This is the first book I’ve read by Thomas King, a well-respected American-Canadian Indigenous author who has won numerous awards in Canada for his writing, often focusing on issues facing First Nations people. Aside from his admirable reputation, he lives in my hometown of Guelph Ontario, and much to my delight, he references Guelph surprisingly often in his latest work of fiction, Indians on Vacation. He also has a reputation for biting humour, which is also on full display in this book. Because I read this on my own vacation, I was especially susceptible to enjoying it, but King’s work is so fabulous it doesn’t matter where you read it, you will love it.

Older couple Bird and Mimi are in Prague on vacation. Mimi loves to travel, Bird does not. Grumpy, missing home (Guelph!) and struggling with a myraid of strange health issues, Bird is dragged along to sightseeing locales and tourist traps by Mimi. Interspersed with their current travels are stories of their past vacations, memories of their short-lived breakup, and general insight into them as a couple. On top of Bird’s physical struggles, he is also burdened with a few mental maladies, which Mimi has fondly given names to in an effort to help him overcome them. For example, ‘Eugene’ represents Bird’s self-loathing. and like the book as a whole, these lighter references are painting a veneer over something much darker, lurking right below the surface.

Within a deceptively simply framework of a single vacation, King is able to introduce and explore a staggering collection of themes and ideas. Reading even one story line or thread of this book is satisfying enough, but the multiple layers of the narrative combine to create an equally entertaining and engaging novel. The character of Bird is a complicated one, yet I found myself identifying with him quite easily. His reluctance at leaving his comfort zone, his annoyance with Mimi consistently sleeping through their free hotel breakfast, his disdain at tourist traps meant to entertain the masses, these are all feelings I’ve myself experienced while travelling. He so succinctly summarizes the breadth of emotions one experiences while exploring; fear, annoyance, astonishment, and exhaustion. The different types of travel are also addressed as Bird’s ruminations on an all-inclusive vacation were especially memorable:

“I came home from the trip with a sunburn, a great story about Mimi having the top of her swimsuit ripped off on a jungle water-slide, and a dozen photographs of some very large iguanas.

But I don’t remember feeling that my social conscience had been improved.

The resort had been a sanitary bubble designed to shield you from the realities of culture and to limit your interaction with the local people. They were there to serve you, and you were there in your role as an ATM with a camera.” (p. 60 of ARC)”

I like to think of myself as a person who cares about others, so in my limited travels, I have come across this internal dilemma. I love visiting tropical places, and yet, it’s hard to not feel like you’re exploiting others while there. On one hand, you are helping their economy because you’re injecting cash into it, and many of these countries rely on the tourism industry. On the other hand, tourism is polluting these people’s homes, and we’ve all been witness to tourists behaving badly or treating the locals as servants. Like Bird and Mimi witnessing the devastating situation of the Syrian refugees while in a Budapest train station, travel offers us a respite from our regular lives, but introduces us to the hardships of everyone else’s.

Now I don’t want to give you the idea that this book is too heavy, in fact, there were many laugh-out-loud moments, and the banter between Bird and Mimi is simultaneously heartwarming and entertaining. Their shared history is extensive, and yet they aren’t immune to hurting each other’s feelings, at times Bird even questions why Mimi is still with him. The fact that they are still careful around each other (most of the time) is a testament to their longevity, and this sensitivity around the relationship of two youngish seniors is one we don’t see often in fiction, especially with this level of wit. If you’re looking for a balanced, well-written book that is both serious and funny, Indians on Vacation is just the ticket.