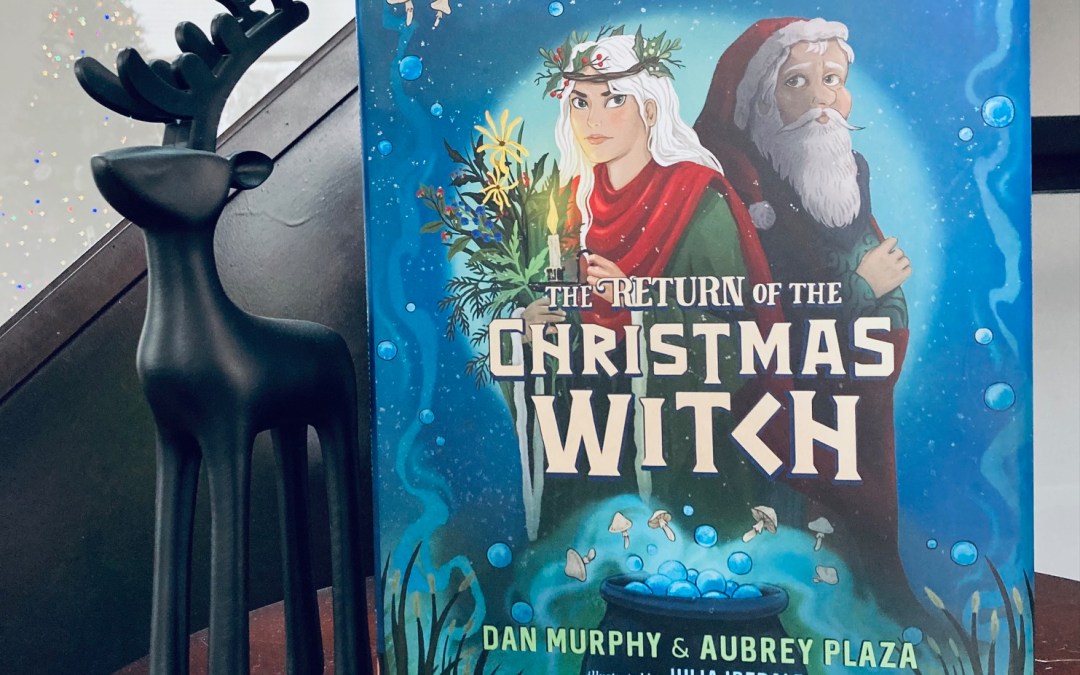 Reading holiday books as Christmas draws nearer is a tradition I truly cherish with my kids. We all get excited to pull out the favourites from the years before, and discover the new gems that publishers send my way for review. I didn’t receive as many as I typically do this year, which I’m grateful for, as my kids bookshelves are bursting at the seams (even with our regular trips to offload some at little free libraries in our neighborhood), so I only have three to showcase here. Each will appeal to a different child or family, so rest assured there is something for everyone.

The favourite among my two kids, aged 4 and 7, seems to be The Return of the Christmas Witch by Dan Murphy & Aubrey Plaza, illustrated by Julia Iredale. This is a sequel to The Legend of the Christmas Witch by the same artists, which I haven’t read, and neither have my kids, so it’s certainly not required to enjoy the second in this series. This one is about the sister of Santa Claus (who is a Christmas witch) who has awoken after centuries of being asleep. She’s found herself in a new world that doesn’t celebrate Christmas as it used to, instead Christmas is run by a huge corporation called “Kringle” which has commercialized it beyond recognition. The Christmas Witch blames her brother, and is determined to send him a message about the mess he’s made. Even if it ruins Christmas for everyone, she wants to make sure he’s aware of how unhappy he has made her.

My 7-year-old daughter really loved this book, she enjoyed the story development and was fascinated by the idea of Christmas Witch being siblings with Santa Claus. My 4-year-old happily sat through the story, remarking on the pictures every once in a while as being really “cute”. There is a particular penguin who is unfrozen from a block of ice that delighted both my kids. Although I appreciated the book’s focus on nature and origins of Christmas, I dreaded reading it because of its length; it’s 56 pages long, and some of the pages had only text, no pictures. We broke it up into two sessions of reading aloud, likely totaling a full half hour of reading aloud. The recommended ages for this one is 5-8, but particularly energetic kids may have trouble sitting still for such long periods, so I’d only recommend this one for the true bookworms in your life.

Next up is a Christmas story that upends tradition, and demonstrates the impact of representation in the best way possible. The Truth About Mrs. Claus by Meena Harris, illustrated by Keisha Morris is about a young elf who doesn’t want to follow in her family’s footsteps. All the women before her specialized in teddy bear making at the North Pole but this elf loves writing stories, not sewing bears. She goes to find Santa Claus and ask his advice, but instead finds Mrs. Claus, who admits to her that it’s herself that runs the operations of the North Pole, Santa is really only ‘the face’ of it. The little elf encourages Mrs. Claus to be open about her true role at the workshop, and offers to write her story to spread the word. Mrs. Claus then realizes how important it is that other people see examples of someone breaking tradition, a good reminder to be true to oneself, regardless of expectations.

This book breaks tradition in a number of ways, the first and most obvious on the cover: a black Mrs. Claus. I can’t say I’ve ever come across a black Santa Claus or Mrs. Claus, which is a welcome and overdue change that’s nice to finally see. What’s even better is that the color of Mrs. Claus’s skin doesn’t come up at all, she’s just black, and the story deals with everything but her skin colour. This reminds me of another tale I read featuring black women but not race, which is encouraging to see more and more. People of all colours need to see themselves on the page, but it doesn’t have to be the point of the book, it just needs to happen more often. My kids never once questioned it, or asked why Mrs. Claus looks different in this book than she has in others, so I’m hoping they are becoming more accustomed to this and I’ll be one of the last generations to be surprised (yet pleased) by this.

This book was a good reminder to me that my 7-year-old is getting a little old for some picture books. A Very Mercy Christmas by Kate DiCamillo, illustrated by Chris Van Dusen is about a young girl who wants to go caroling, but can’t find anyone to come along. Instead, Mercy the pig is sent outside with her, and they pick up a couple of other animals along the way. Mercy’s unexpected singing voice draws some attention, and the humbugs are transformed, until everyone in the neighborhood comes together to bring a little Christmas cheer to their street. This ‘gentle miracle’ is accompanied by a big stack of toast to snack on afterwards.

My 4-year-old liked the fact that a paper ornament was included in this one, and he enjoyed the pictures of the animals singing, even giggling when I turned the page, but I could tell my oldest was a bit bored by the whole thing. Personally I found the storyline slightly nonsensical, but I’m not the intended audience. This is part of a series about Mercy which may explain some of my bafflement, but I’ll admit I also get grouchy about including ‘gifts’ in books for kids (stickers, ornaments, etc.) because I want kids to enjoy the book for being a book, period. All that said, this is a good book for the younger audience because it is well suited to a shorter attention span, and both my kids loved that animals played such a pivotal role in the plot.