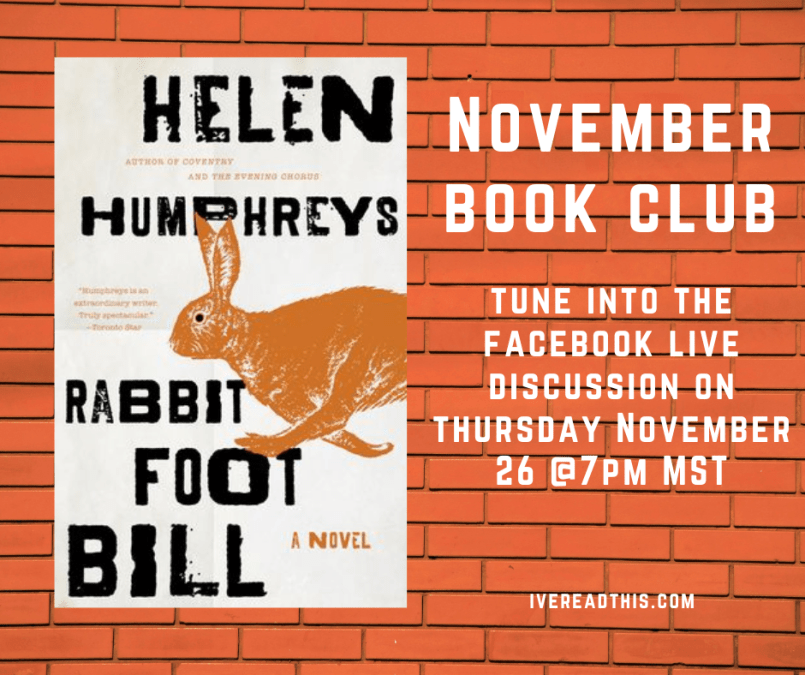 Rabbit Foot Bill by Helen Humphreys is my online book club’s November pick (yes, that’s still going!), and days after we announced our choice, a reader messaged me to say it took her only four hours to read. I love a fast read, so I was delighted when I read this in a single day, but I have no doubt it will stick with me for awhile. I happened to read it on Remembrance Day here in Canada, which is a day we take to reflect and remember those men and women who sacrificed their lives for us during the first and second world war. We also pay our respects and gratitude to those who are currently serving our country in other conflicts around the world. It’s not until the very last few pages that I realized just how perfect Rabbit Foot Bill is as Remembrance Day book, but I won’t talk about that here because it’s a bit of a spoiler. Just trust me on this one, it’s a quick and engaging story that’s well worth the few hours it will take you to complete.

It’s 1947 in rural small-town Saskatchewan and Leonard Flint is a young boy who is constantly bullied. He befriends a local hobo known as “Rabbit Foot Bill” because he traps rabbits and sells their hind legs as charms. Together Bill and Leonard spend lots of time outdoors, hiding from those who don’t understand them. Everything changes when Leonard witnesses Bill murder someone and is subsequently sent to jail. Years later, Leonard (who is now a doctor) reunites with Bill at the Weyburn Mental Hospital and their friendship picks up right where it left off those decades ago. Despite his better judgement, Leonard is drawn to Bill even though he is not one of his patients, and this strange obsession continues to haunt Leonard even as his life bends and breaks to accommodate this unique and forbidden friendship.

The story begins in 1947, but quickly moves on to 1959, but then goes back again to 1947 before ending a few decades later. This movement between time periods is part of the plot as it follows Leonard’s efforts to piece together what happened when he witnessed the murder, and how it has affected him as an adult. Even though the time periods are only separated by a few decades, the stark contrast in how the mentally ill patients are viewed and treated is immense. One of the quirkiest (and informative) parts of the book is when Leonard participates in experimental treatments using LSD, where both the doctor and patient would take it together. This book is based on a true story, and it’s clear the author has done a significant amount of research because this type of experiment did in fact happen back then, and it’s shocking how often some of the doctors took the drug themselves. The Weyburn hospital that Leonard lands his first job out of medical school is known for its progressive treatments, but I must admit I felt a great deal of relief when it became clear to some of the doctors that taking drugs along with your patients isn’t always a good idea. Could you imagine if this practice continued? Yikes!

Leonard tells the story to the reader directly, occasionally inserting in a remark that demonstrates he is in the future, and he’s gained a new and healthier perspective since the events occurred. This serves to lessen the tension because the reader can be fairly sure Leonard continues on safely, but it also heightens the importance of what he’s recounting. This event and relationship in his life is an important one, so he’s designed a narrative around it. In subtle ways he is playing to an audience with his particular word choice: “But sometimes there are moments inside a story that could operate as the ending, which feel like an ending…If the story had only stopped there, then everything would have turned out all right” (p. 119). As a die-hard bookworm I love a good storyteller, and this feels like one of the stories that gets passed down from generation to generation, mutating with every re-telling.

Although this book is marketed as literary fiction, it does have an element of mystery to it, because what exactly is the true nature of Bill and Leonard’s relationship? Is it friendly, sexual, parental, or a mix of the three? Why is Leonard obsessed with Bill, are we getting the whole picture or is he leaving out major events? Can we trust Leonard as a narrator? Despite all these lingering questions, Humphreys also offers us an engaging character study written with a keen eye for detail and setting. Readers of Humphreys will know how beautiful her writing is, and this book has enough introspection to please any philosopher, yet it’s presented in a way that keeps the plot moving forward at a pleasing pace so you’re really getting the best of both worlds.