Book Review: In the House in the Dark of the Woods by Laird Hunt 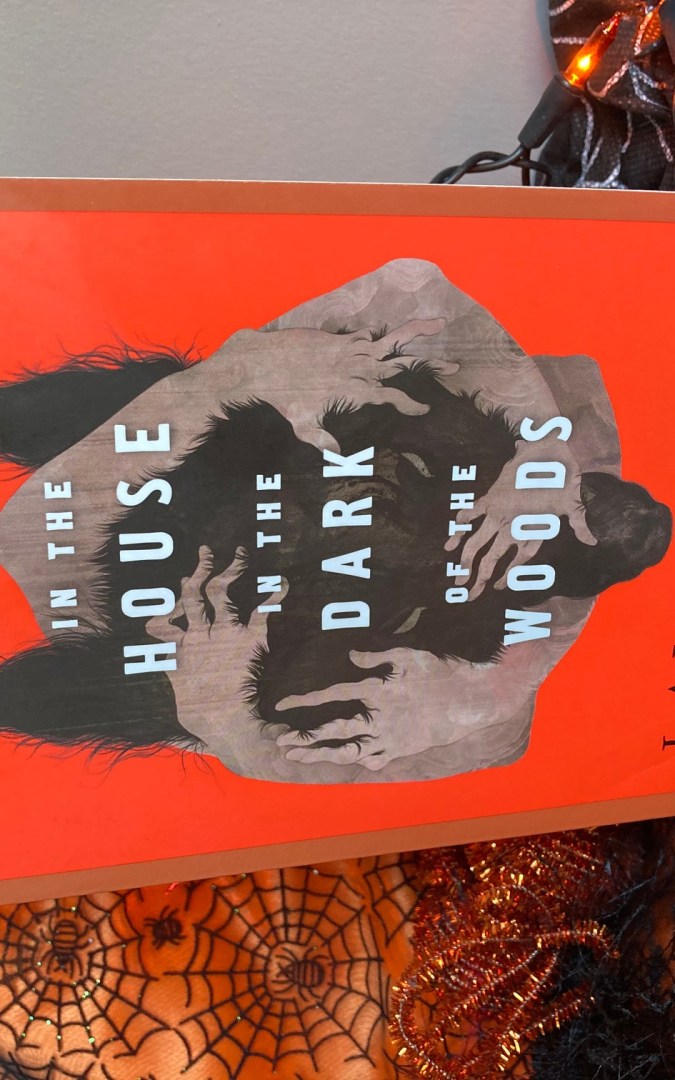 This is probably one of the oldest books on my shelf. Hachette shipped me a copy of In the House in the Dark of the Woods by Laird Hunt two years ago, and every time Halloween came around, I vowed to read it. I finally got the chance in 2020 because *gestures wildly at everything* and although I’m glad I knocked it off my list, I’m a bit confused as to what I just read. Is it about witches? Yes. Is it about the devil? I think so. Was I freaked out by it? Absolutely. So in that case, I suppose you can say this is the perfect Halloween book, but it requires a bit more concentration and imagination than your typical ghost story.

A woman is lost in the woods. She’s out picking berries, ready to walk back home to her cabin where her son and husband await her, but she stays out too long and loses her way. Luckily she comes across a cozy little cabin where a delightful woman named Eliza welcomes her, and feeds her yummy food. Days pass without our protagonist (who is referred to as ‘Goody’) realizing it, and the longer she stays with Eliza, the less she wishes to return home. But, there are some strange things in this house, like for instance, multiple Elizas. And every once in a while Goody will catch a glimpse of some horrific dark being lurking in the background, and why does a young girl dressed in yellow keep skipping around just beyond the surrounding trees? There’s more questions than answers in this book, and when a ship made of human bones and skin comes flying into town, stuff gets weird, real quick. Did I mention there’s another old cabin in these woods where a creepy old woman lives? And this creepy old woman just pushed our Goody down a well? Yup, you have to be brave when reading this one, and push through the pages even when things become so bizarre you feel completely unmoored from the story in front of you.

You’re no doubt getting the ‘adult fairy tale’ vibe based on the description I just gave. A house in the woods, a scary old lady that eats children, there’s even a wolf cloak that gets stolen and passed around! So many fairy tales have horrific undertones that lay just beneath the surface, even though they are meant for kids. Because this is a story for adults (or really brave teenagers) the horror lies in what’s not being addressed directly. As we get older, we think of the consequences, and that’s what truly terrifies us: not what we’ve escaped from, but the fact that we had to escape something in the first place. Out of all the terrifying moments depicted in this story, the scariest is the moment Goody realizes she basically escaped a child predator when she was young. As an adult she’s later shown this man’s true deeds, and he does pay the ultimate price, but the horror lies in what Goody escaped without even realizing the severity of the situation she was in. Even worse is the thought of so many children who were not so lucky. As a parent, this is what I found truly haunting about this book.

Aside from the scary stuff, the narrative is playful, and the author treats Goody’s adventure like a game. Little woodland creatures come to help, but it’s not always clear if they are a good or bad omen. Goody frequently finds herself walking up an unknown slope or climbing down into a deep unexplored place, rarely is she on an even keel in any sense of the word. There’s lots of repetition in general; rhymes, games, journeys that circle back, it’s all part of being in the woods where one can get lost or turned around easily. But who can you trust to get you out? There are very few male characters in this book, yet the women are not to be relied upon either, they fluctuate between dangerous and dependable. This story would be a far lighter tale if everything wasn’t tinged with such a serious threat of violence shadowing all the encounters. As the plot continues, we learn that even our protagonist may not be trustworthy, and a darkness lies behind everyone, despite their sunny appearances.

I suppose I think of this book more as a warning than anything, I’m just not show what it’s warning us about. Straying from the beaten path? The danger of letting our darker side take over? Maybe it’s pointless for me to seek a hidden message in a work of horror, but this book reads so much like a fairy tale I think I’ve been programmed to search for a lesson from a story like this. Perhaps ‘trusting your instincts’ is the most likely take-away, although instincts are nothing in the face of magic, especially the dark magic found among the trees of these dark woods. Despite my muddled sense of what I should be learning from this book it was a scary read and perfect for cuddling up with this Halloween.

PS-I thought this was the first Laird Hunt book I’ve ever read, and this is even after reading his bio. But when I typed his name into the search bar of my blog I discovered I had read one of his earlier books, Neverhome. Wow, do I feel old today! What else have I forgotten?