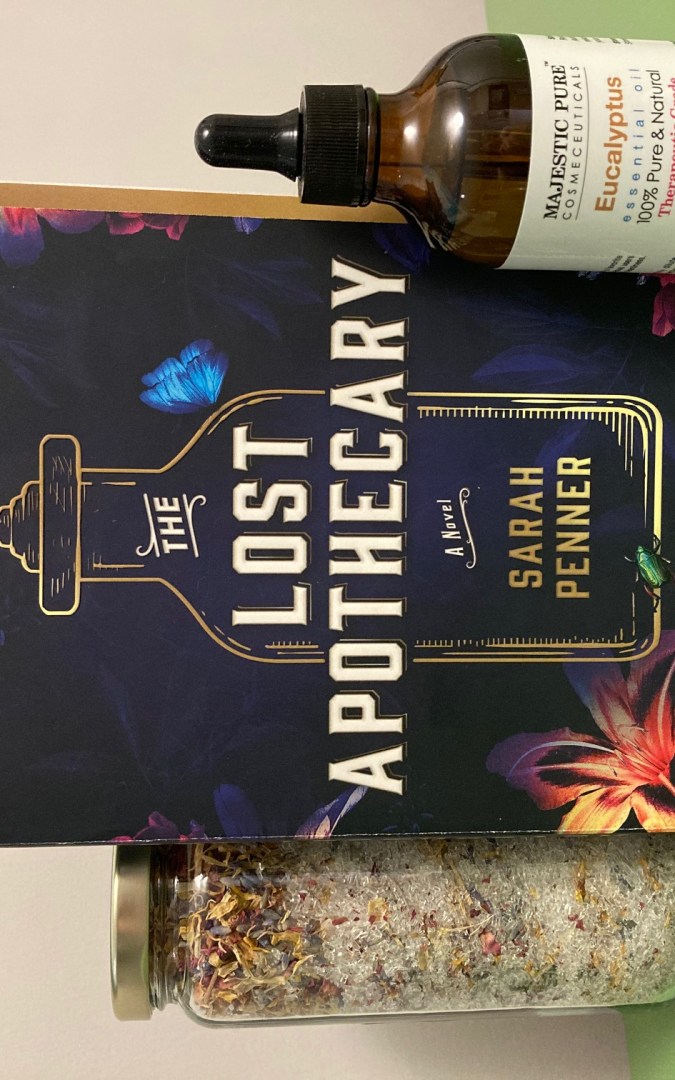 It seems like I’ve been reading a successful streak of female-centric historical fiction lately, so it comes as no surprise that the popular novel The Lost Apothecary by Sarah Penner was just as pleasing. Is it because I’m a woman that I like to read about other women in the past? I suspect it has a lot to do with it because I find these characters relatable, even though they are living hundreds of years before I was born. I’ve always enjoyed books that take place in the domestic realm too, and because most women weren’t allowed outside of that space until most recently, many of these new releases have a finely-tuned balance between the internal and external. Whatever my reason for enjoying them, I’m finding myself turning to them more and more often when I’ve got some ‘free’ reading time, and as long as this positive streak continues, you can expect more of them to appear on this blog.

Chapters alternate between three women; Nella owns a secret apothecary in London in the late 1700’s and mixes poisonous concoctions for other women to murder men with; Eliza is a pre-teen and customer of Nella’s, following her mistress’s orders to pick up one of these deadly tinctures, and Caroline lives in the present-day and visiting London when she stumbles upon an old vial that once belonged to Nella, hundreds of years ago. We move between the historical and contemporary storylines, slowly learning more about Nella’s business, Eliza’s state of mind and why the secret shop had to close so suddenly. Caroline is an amateur historian and enthusiast, excited to take up this mystery as a distraction to her crumbling personal life once she discovers her husband has been cheating on her. Three women, all in different stages of their life, all with very different hopes for their futures. Although calling this a ‘feminist’ novel may be a bit much, it does certainly speak to the strength of women and our ability to empathize and support one another.

Are you the type of reader that is put off by a character you don’t like? Luckily I’m not, because I hated Caroline, she gave up on her dreams of building any sort of career because she was too busy planning a wedding (?) so I didn’t feel sorry for her when she finally realized she should have spent more time on her own life plan. It sounds harsh but I just don’t have time for those kind of people. Caroline’s silliness is wonderfully contrasted by the dark and mysterious Nella, who feels badly for the men who are dying because of her, but knows she is doing many women a great service. Her customers are women scorned, abused, or cheated on, so not exactly a justification for murder, but back in those days, women had so little recourse many saw this as their only way out. Eliza befriends Nella and helps her out at her shop for a few days, but she remains the most distant of all the characters, instead she moves the plot along and keeps the action rolling once it becomes clear how sick Nella is getting with an unidentified illness.

Despite my annoyance with her, I found Caroline’s storyline the most interesting because she was actively solving the mystery of the lost apothecary. She first discovers the vial ‘mudlarking’, which is essentially just sifting through the muck of the river Thames, and from there she meets a helpful librarian who helps her track down old maps and discover potential locations that will lead to more answers about this glass bottle and its unique etchings. Caroline has a passion for ordinary people in history, but of course, gave this all up to become a wife, because apparently you can’t do both (ugh). We have to suspend our disbelief as Caroline uncovers the story behind the last few days of Nella’s shop, but it was a fun little ride that I was happy to be on, especially because it included a few twists I wasn’t expecting. This is a novel firmly driven by plot, but the backstory of Nell gave it a well-rounded feel that easily drew me in, so when the ending turns deadly, I was surprised at how much I cared about the safety of each woman.

My favourite part of this book was learning all about the old-timey remedies they used, including the power and impact of plants and flowers on our own health. There are a few (safe) recipes included at the end of the book which helps build the atmosphere of the book, I almost wished they appeared throughout the pages rather than at the end, it would have placed me firmly back inside Nell’s apothecary in a more seamless way. Still, I enjoyed this book, it was a pleasant and quick read that engaged me through various literary tactics, resulting in yet another work of historical fiction I would happily recommend to others.