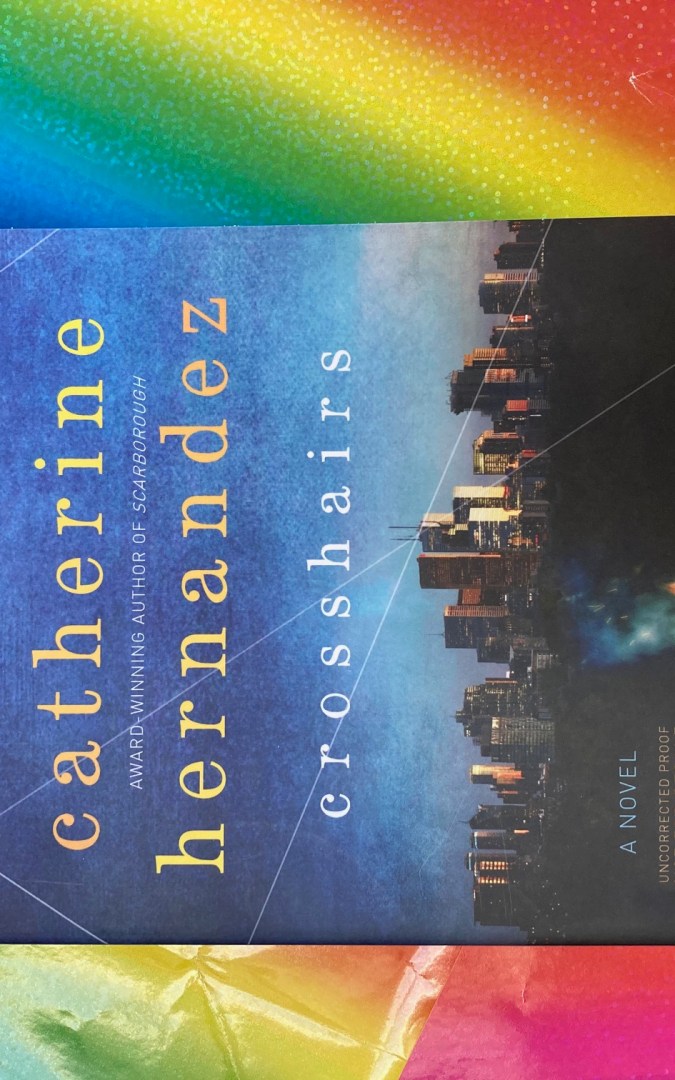 Crosshairs by Catherine Hernandez is about a dystopian society in which people of colour, and LGTBQ2S folks are referred to as ‘Others’ and placed in concentration camps. But what readers may find even more shocking than this terrifying premise is the fact that it takes place in Toronto, Canada. Many will be stumped by this choice of setting, after all, us Canadians don’t have a gun problem like our southern neighbors, and aren’t we just known for apologizing all the time? Sadly, Canadians who read this will know all too well that those stereotypes just aren’t true. Although we do apologize frequently, racism and discrimination are also found here, and Hernandez is quick to point out the connections between the terror we enacted on First Nations populations and the terror she depicts in her book. Will this be an uncomfortable read for many? Absolutely, but this discomfort is Hernandez’s aim, and she wields her words with purpose and skill.

Kay is in hiding from a new police force known as The Boots, who imprison POC, queer, disabled, transgender, or essentially anyone who is different then a white, straight person. Kay is a queer black man and former drag queen, and has found a basement of an ally to hide in while chaos reigns outside. But when Kay is informed that he’ll have to keep moving, he finds himself caught up in a new kind resistance, a group of people desperate to protect their friends and fight back against the Canadian government that has quickly turned on large swaths of its population. In this world, the devastating affects of climate change trigger a weakening of equality and fair laws, and those already at the margins of society are rounded up into workcamps as an excuse to give them shelter and purpose. It becomes increasingly clear how unfair and brutal these camps really are, and when people are thrown into them for simply being the wrong colour, the population quickly divides itself into those who believe this is wrong, and those who believe this is right.

The beginning of the book includes various messages to the reader; trigger warnings, a poem dedicated to the victims of the Pulse shooting, the explanation of an asterisk to help denote a person who uses the they/them pronouns, and a simple note that states:

To the people of privilege

You will survive your discomfort while reading this book

who sit dangerously at various intersections of identity,

What will you do?

It’s ironic, one may consider this a trigger warning in itself, but a trigger warning for the privileged, like me. Placing this at the beginning of the book is a bold move because it will immediately put some on the defensive, but if they truly disagreed with the idea of white privilege, they most likely wouldn’t be picking up a book like this in the first place. There’s many reasons why people may want to steer clear of this story; it’s violent, it plays on our worst fears of climate change, it depicts a widespread cruelty that some may feel is an exaggeration, it uses a lot of profanity, Still, its writing is beautiful, the character development is taut yet engaging, and it’s ultimately a novel about hope, and digging deep to find our inner strength.

There’s a section in the book where Kay talks about the ‘before’ time, when he wasn’t being hunted down for looking different. He remarks on the fact that he shared a post on Facebook all about the lack of accessibility of Toronto’s subway stops, so he felt like he was doing something good by sharing this on social media as an able-bodied person, but that’s all he did. He admits to himself that this was a performative act of being an ally for the disabled, and now that his life has fallen apart and he’s the one in need, he realizes how badly he needs his own allies, those who will truly stand up for him even if it’s a risk to themselves. It would be a mistake to think this is a book about pity, or how terrible some people’s lives are compared to others. Instead, Crosshairs is really about the importance of being an ally, of lifting up those around us, even when it comes to the detriment of ourselves. It reminds me of the book Shrewed by Elizabeth Renzetti, where she makes the argument that we need to ‘pass over the grievance microphone’ to women of colour, or those less privileged then us. This novel also focuses on those with a safety net who are learning to “move aside and uplift” (p. 149 of ARC). It’s a simple concept, but difficult to practice, and asks a lot of people. Still, it’s something I’ll keep in mind as we move through this pandemic, a lofty aim, but an important one nonetheless.