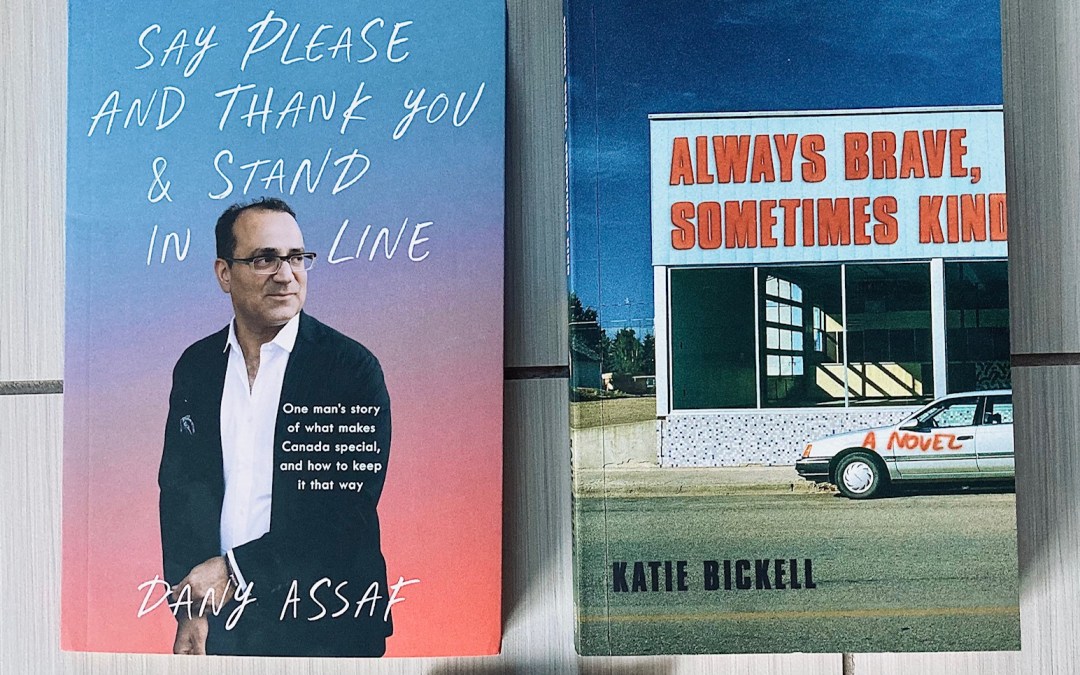 Bookworms are especially perceptive. I may be biased of course, but for those who read as much as I do, I think we all share the ability to acknowledge the thousands of perspectives we can find in the pages of books. Unintentionally, I read two books, one after the other, that pains a picture of the province of Alberta, Canada. We have close to 4.5 million people living here, and the political atmosphere feels particularly divisive, especially as we begin to ease health restrictions; many are for it, while many are not. This division is certainly not unique to our province or situation, but both of these books, one fiction and one nonfiction reminded me that these divisions have existed for decades, and it’s not how we eliminate them, but how we work through them that matters most.

Say Please and Thank You & Stand In Line by Dany Assaf is a memoir. Assaf is a successful Muslim lawyer now living in Toronto, but he grew up in Edmonton Alberta, and his family has been here for generations. He traces his roots all the way back to a fur trading business in northern Alberta, and his elders were part of the group who built the first mosque in Alberta in 1938. Like any good Canadian he loves hockey, and recalls cheering for the Edmonton Oilers as a defining moment of his childhood. Despite his obvious love of Canada and desire to be a good Canadian, his family was targeted by racist attacks following the 9/11 tragedy. Even though his parents were forced to endure these unfair and unfounded offenses, Assaf did not let this sour his love of Canadians, and the multicultural reputation we are known for. As an adult he founded “Fast in the 6”, an annual event dedicated to breaking the fast for Ramadan but also celebrating other cultures and religions. His book is a love letter to Canada, an explanation of why he loves this country, and why we should fight to remain a diverse and accepting society.

With not much room to expound on his beliefs, this book is a fairly surface look at his life, and why he thinks the way he does. His disbelief at his family’s experiences with racism does seem shocking, especially when he explains how active they were in their own community, it’s like old friends and neighbors just turned around and became completely different people directly after 9/11, treating the Assafs as if they were dangerous strangers. I wish I could say I was surprised, but unfortunately, I can’t. Of course it’s terrible, and I wish the society Assaf describes wanting to preserve is what everyone experiences, but as readers of my blog and fellow Canadians are well aware of, Indigenous Canadians experience racism all the time, and that sadly, hasn’t changed much. Assaf’s love of Canada is infectious, and despite our problems, I do love this country, and am proud to call myself Canadian. His optimism and hard-work ethic is what Canadians love to espouse as one of our nation’s greatest assets, and his is certainly a success story, but as much as I wish this was the case of all Canadians, it simply is not. Regardless, reading his book made me feel good, it gave me a goal to work towards, it reminded me of the importance of community and remaining open-minded, and most importantly, it gave me hope.

Always Brave, Sometimes Kind by Katie Bickell is described as a novel on the cover, but those who have read it all agree it really comes across more as a collection of linked short stories. There is no one protagonist or central character, instead, we are introduced to a few different people and their family members and friends, most living in and around Edmonton and Northern Alberta. The first chapter sees a tired emergency room doctor struggling to treat patients in an understaffed hospital, then going home to a daughter whose adopted son has been kidnapped. Another chapter introduces us to a young Aboriginal girl with big dreams of becoming a musician, teetering on the precipice of making a bad decision. A Dad who loves his wife and kid, desperate to make ends meet pretends he is a woman to begin working a phone sex line, while a rough-around-the-edges sister makes the ultimate sacrifice to protect her younger, more ‘successful’ sister. The complicated lives of these people is astounding, I felt overburdened simply reading about them, especially knowing that these issues are directly tied to things in Alberta’s past and present; its healthcare cuts, its boom and bust economy based on oil prices, its ongoing racism towards Indigenous people. It’s painful reading about these things because I know they are all too common here.

Despite the sadness, the writing is beautiful. The characters, especially the difficult ones, were all so memorable. I participated in a writers conference this past weekend (as an event host), and the writers I was interviewing all agreed that writing your characters from a place of empathy, even the villains, is a good habit to get into. Clearly Bickell has done just this, I cared about each and every one of them, even as they treated each other badly. The only thing each person had in common was bravery; the bravery to keep going even when things got tough, which for many of them, was all the time. Only some were able to find the space and time to be kind, but it’s this struggle to find kindness that made the book so engaging and realistic. The web that these characters weave with each other is complicated, luckily Bickell has created this family tree to help future readers and book clubs sort it all out. This diagram definitely would have come in handy while I was reading it (I only came across it afterwards) but I still loved the book, even if I couldn’t remember everyone’s connections with each other.

So we have two different Albertas here; one book is written to encourage us in maintaining its beauty, while the other is pointing out the pain that we’d all like to simply gloss over and forget. Both voices are necessary in our national discourse, and depending on the day you talk to me, I’d agree with one or the other, or both. But can they exist together, at the same time? Does the Edmonton that sparkles in Say Please also shine bright in Always Brave? I guess that depends on who you talk to, but I’d like to think that if we all move forward with hope in our hearts, a better Alberta is just around the corner.