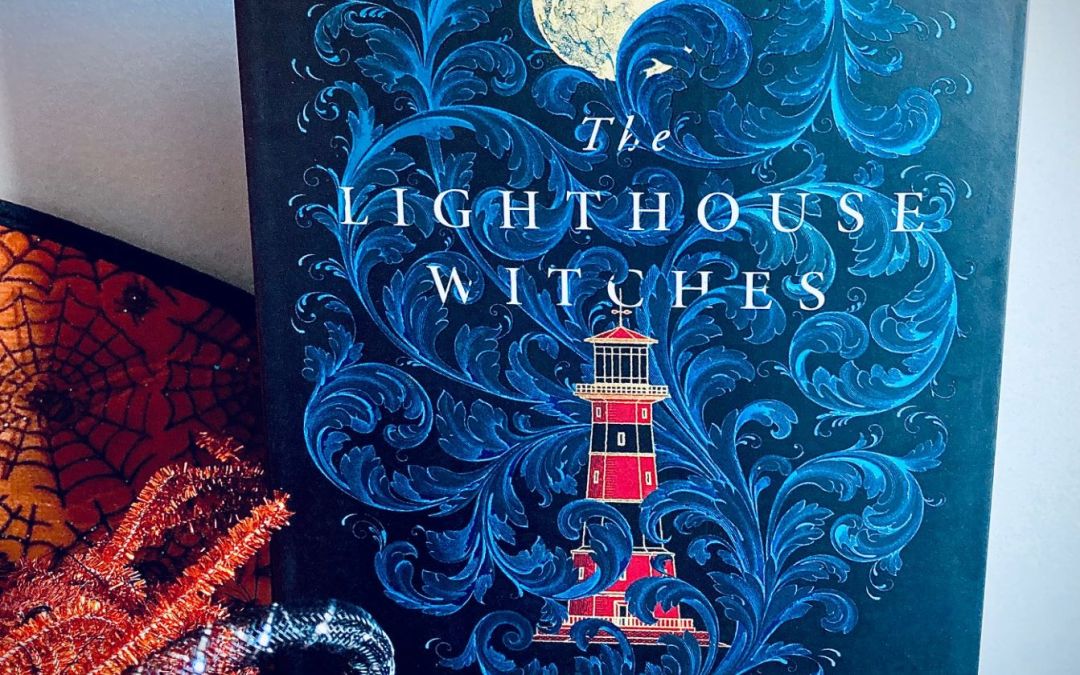 Happy Halloween! Today is the perfect day to curl up with a spooky read (really, the entire month of October is) and I’ve got a stellar recommendation for getting you into the Halloween spirit. The Lighthouse Witches by C.J. Cooke landed on my doorstep towards the end of this month, so I squeezed it in so I could finish it by October 31, and I’m so glad I did, because it’s all about witches, PLUS its got a fantastic Halloween scene in it. And compared to some of the more violent horror novels I’ve read this month, this one isn’t gory, so it’s a more accessible story with wider appeal.

Liv has moved her three girls, Luna, Clover and Saffy to an obscure little island in Scotland called Lon Haven. She’s an artist, and has taken a commission to paint a mural inside an isolated lighthouse that’s rumored to be built upon a cave where witches were tortured centuries ago. We jump between the past (when witches were being executed) to the present (when Liv is seeing visions of abandoned children in the lighthouse) to the future, (where Luna is a grown woman, pregnant with her first child and struggling to piece together the mystery of why her mother and two sisters disappeared on Lon Haven all those years ago). Knowing that 3 of the 4 main characters are going to mysteriously vanish plunges the entire story into a suspenseful race adding symbolic weight to every action or conversation during the ‘present’ day storyline. The plot becomes even more intricate when its suggested at various points that the superstitious beliefs of the people of Lon Haven are based on a horrific mistake, but then how to explain the strange appearances of children with numbers carved into their legs and no recollection of how they got there? Elements of folklore, superstition, and love that extends through generations all come together to create a both classic and modern tale of witchcraft that keeps the pages turning.

Books about witches always tend to examine the strange occurrences of mass hysteria, as it was this belief that led to the majority of witch trials in history; an unfortunate, natural tragedy befalls a group of people, and without an understanding of why it happens, this same group looks for a scapegoat, typically someone who doesn’t conform to society’s expectations at that time anyway. What’s unique about this book is the characterization of a group of women in the ‘present day’ storyline who appear as though they may be type cast as the witches of their town, (they meet secretly by candlelight), but they actually whip up the unnecessary hysteria that’s typically used against witches. So who is the aggressor in this book? Throughout the story, characters and their intentions are called into question, and because we jump around in time we sometimes get the truth quicker than expected. A chapter may end on a cliffhanger, but Cooke doesn’t always pick up where she left off, instead we have to find the answers wherever we can get them, in whatever time period they may appear.

A mixture of literary horror and mystery, this book plants red herrings everywhere, in both the characters’ and s the readers’ path. Even by the very end I was uncertain if there was something supernatural at work, or just an evil earthly presence that had outsmarted everyone. About halfway through the story Liv accepts that her regular sense of right and wrong has taken a detour:

I’ll admit, I felt better once she’d done that, and yet I usually wouldn’t have given heed to such things. Fear, combined with a touch of desperation, makes you much more open to buying into otherwise crazy practices (p. 177).

When one of Liv’s daughters finds an ancient text in their little home beside the lighthouse, potential links to the present and future begin to form, but I had to constantly remind myself that hundreds of years divided these storylines, so my insistence on seeing patterns and connections wasn’t always possible. Despite all the uncertainty I experienced while reading, the end of the book was surprisingly uplifting, considering the muddle of problems previously worked through.

Lastly, the lighthouse setting was creepy, and if you’ve seen the movie The Lighthouse, you’ll know why I say that. Still, the history of the Lighthouse’s land in this book is spooky enough without having seen that film, and it grows in importance as the story continues, but not in the ways in which you originally might believe. I think my favourite part of this book was the author’s ability to keep me guessing, and the general atmosphere of unease she so cunningly crafts. This is my first book by C.J. Cooke, but it most certainly will not be my last!