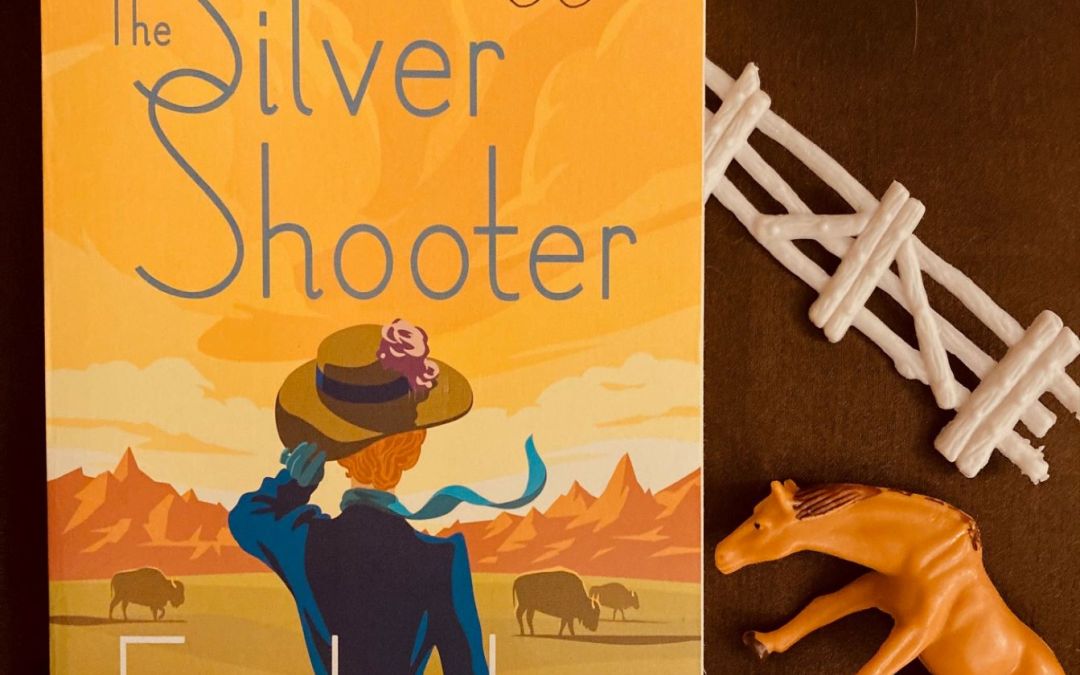 I just read a string of particularly grim books so the thought of sinking into the pleasantries of a cozy mystery (by a Calgary author no less!) was more than appealing. The Silver Shooter, A Rose Gallagher Mystery by Erin Lindsey was released in 2020, and although it has been on my shelf for over a year I was always drawn to the promise of a simple and satisfying mystery. Some stories are hard to read because the line between good and bad is so blurry, but that’s why I love cozy mysteries; there are clear black and white rules to follow, and the baddies always get it in the end while the heroes reign triumphant. It’s no different in this novel either.

It is 1887, and Rose Gallagher has been called away on agency business with her very handsome and wealthy partner Thomas to the badlands in the west. They belong to the famous Pinkerton Detective Agency, but are members of the secret paranormal branch which explores ghosts, portals to the otherworld and the like. Their client Theodore Roosevelt (yes, that one) who also has a the gift of the sixth sense, suspects there is a magical creature preying on ranches out there and hires Thomas and Rose to go investigate. Once there, they become caught in between a few mysteries; the persistent ghost of a murdered businessman desperate for justice, the brutal attacks from the aforementioned creature who may or may not be supernatural, and the local ranchers desperate to pin their economic woes on the local Lakota tribe. With this many-threaded plot comes a love story too – Rose and Thomas are smitten with each other, but unable to express their true feelings because they reside in opposite classes of wealth. Rose is a woman before her time; she can handle a gun with confidence and decides to wear pants for the majority because it’s much easier to ride a horse that way, but she is still bound by societal conventions more often than not.

There’s much to love about this book, and Rose is certainly one of them. She’s torn between the expectations of her time, and her fierce determination to help those less fortunate, so you can’t help but root for her. There’s a particularly memorable scene where she annihilates a bunch of cowboys at a game of poker, which instilled a surprising moment of pride in me as a female reader – we independent women love to subvert expectations! Rose is also quick to defend the Lakota people against the unfair accusations from the ranchers. Tensions are high between the ranchers and Lakota who butt up against each other on shared land, but it’s obvious that racism has quite a bit to do with it, so in that way, Rose is also ahead of her time. The depiction of the Indigenous characters was well-done too; instead of being lumped in as one kind of people, their separate personalities came alive on the page becoming one of the more interesting groups of characters Rose and Thomas come across in their travels. Using their Indigenous knowledge of the spirit world, they were also very helpful in solving the final mystery.

This book is the third in the Rose Gallagher mystery series, but having never read the first two, I can assuredly say there is no requirement to read from the beginning, although reading a series in order is always more pleasurable especially because it’s what the author intended. Rose and Thomas’s romance is turned up a notch due to their travels outside of the city, but what happens between them at the very end of this novel comes as a bit of a shock, so now I’m considering reading the next installment when it’s published because my interest has been successfully piqued.

Although there are a lot of competing elements in this plot (ghosts! man-eating monsters! racist cowboys! a treasure hunt!) I never felt overwhelmed or lost. The pacing works nicely, and Rose keeps everything and everyone grounded around her, including the reader. Although she’s not my favourite female detective of all time (Jessica Fletcher will always hold that torch) she’s certainly one I’d like to continue following; her can-do attitude is something we all need a little more of in our lives right now.