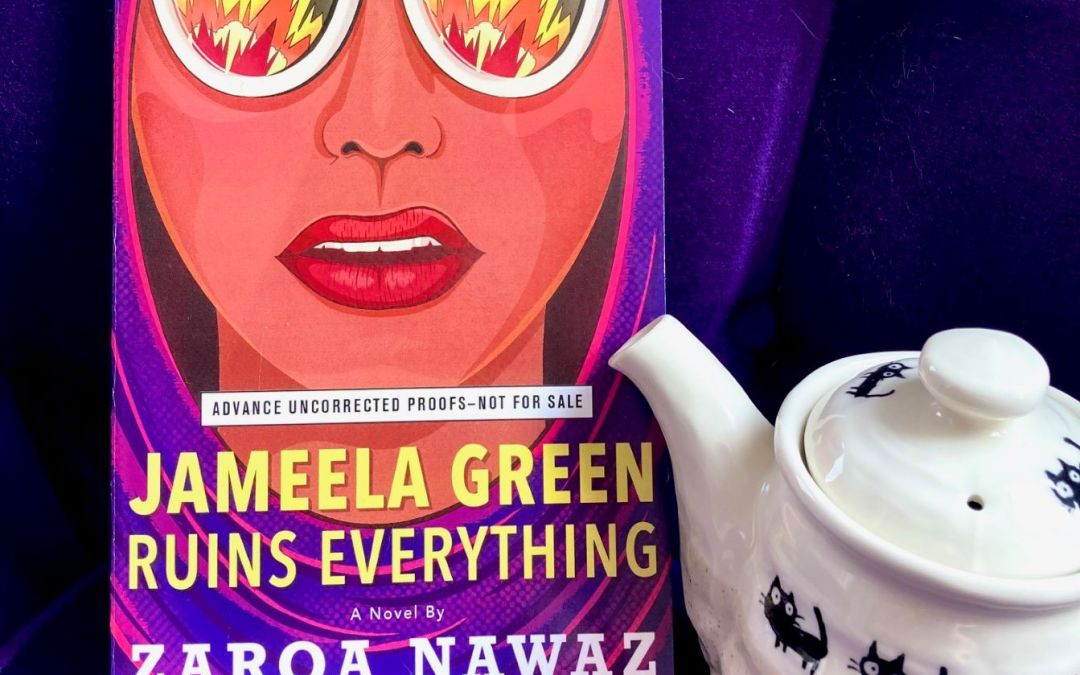 When I originally received this book for review, I dismissed it thinking it was YA, which I don’t normally read except under special circumstances. But after seeing it appear on more than one ‘notable spring books’ list, I thought I’d give it a try, knowing at the very least that it was written as a work of humour. Jameela Green Ruins Everything by Zarqa Nawaz definitely made me laugh – it’s an entertaining book that reminds us that just about any challenge can be conquered if we just learn to laugh at the absurdity of it all. What I’m still left wondering is whether we should respect boundaries of what we can consider a laughing matter, and what is too serious to become the butt of a joke.

Jameela Green is a middle-aged (non-practicing) Muslim woman with one teenager and a doting husband. She sells insurance to farmers, but has written a book and is hoping it will be a bestseller. She spends much of the book ‘talking’/praying to God, and when her local imam hints that she must do good for others before God will answer her prayers, she decides to hand out food to the local homeless population. One homeless man in particular (who ends up buying her a latte instead of the other way around) ends up being recruited into DICK (Dominion of the Islamic Caliphate and Kingdom – essentially ISIS). The previously mentioned imam is kidnapped by the CIA assuming he was part of this plan to recruit into DICK, and they bring him to Syria to provide secret intelligence. Jameela finds out her imam has been taken to the middle east, and pledges to bring him back to appease God. Finding herself in the middle of a terrorist plot, she is forced to carry out some absurd activities to keep herself alive while her family worries about her well-being back home, convinced she has been converted into a DICK operative as well. Nothing is straightforward in this novel, but Nawaz is shockingly good at keeping the situations lighthearted despite the dark undertones.

I’m sure it’s obvious by the summary above, but the plot moves at lightening-speed in this one. It must, to fit everything that happens into a book this length. Prayers are interspersed between chapters, each only about a paragraph long, reading more like a pleading to God than a recitation we may expect (and the God referred to in this book takes many forms, more often than not a female entity preferred by Jameela). At some points the assumptions that forced characters to land in their particular situations were flimsy, but like many humour books in this adventure vein, a certain amount of suspension of disbelief is required to go along with the fun of it. Somewhere between the unplanned assassination and the impromptu wedding, I became comfortable with the idea of accepting just about any plot twist that was thrown my way, as long as it helped to move Jameela closer to the ultimate goal of reuniting with her family (and selling a bunch of books in the process!).

Zarqa Nawaz writes in a distinctive voice; Jameela’s first person account is peppered with pop-culture jokes, while there are life and death situations happening around her. At one point, she is about to cut off another woman’s head, yet right before that were some jokes about make-up. I can’t recall ever reading a book similar in tone, because it’s difficult to pinpoint my feelings about it all. On one hand I appreciated the humour, as it made such a thorny topic accessible in a way I would never think possible. On the other hand, I couldn’t shake the feeling that laughing along with Jameela’s sarcastic quips felt sacrilegious and disrespectful to all the lives ruined by the religious extremists that were being made fun of in this story. It’s a brave act in a way; pairing the horrific with the humorous, but perhaps this is another tactic to break down the barriers of ‘us’ and ‘them’? This book so rightly points out the dehumanizing of Muslims and those in the middle east, many unfairly treated and manipulated by Western foreign policy. Ultimately the humour neutralizes any political leanings or previously-held beliefs, which invited me to pay closer attention when characters spoke seriously about the little-known recruitment tactics of terrorists, or the unprovoked attacks by Americans.

Although this book deals with an uncomfortable topic many would prefer to not speak about, this unique attempt at facing these issues head-on, and with lightness is a strategy I can appreciate. As someone far removed from these issues it’s relatively easy for me to laugh along innocently, but I’d be curious to know if members of the Muslim community felt comfortable to respond in a similar way.