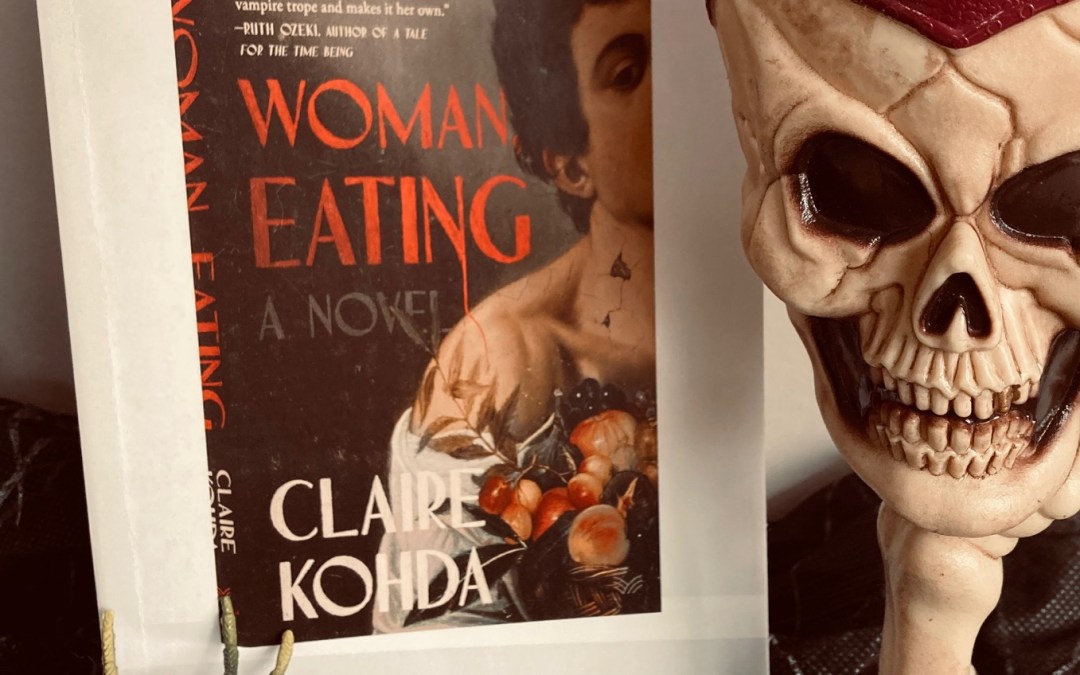 Woman Eating by Claire Kohda explores the life of a vampire through the lens of a millennial and the struggles unique to that generation: someone who is struggling with living on their own, providing for themselves, reconciling who they are, all while dealing with a parent in a care home. Although I wouldn’t call the book humorous, there is something funny about the whole plotline and the lack of action. Better described as a book about a vampire who’s struggling to vampire, I couldn’t help but take it seriously as it felt like the text deserves more consideration than it outwardly appears.

Lydia is a modern-day vampire. She’s moved her mother into a care home, who is the only other person in the world who knows she is a vampire. Having ‘turned’ her daughter as a baby, her mother warned her of never telling anyone her secret, and they hid themselves from scrutiny by never consuming human food around other people and generally isolating themselves as much as possible. They slathered on sunscreen when outside, and drank pig’s blood procured from the local butcher to keep themselves alive, but now that Lydia is on her own and that butcher shop is closed, she can’t find anything suitable to satiate herself. In addition to the gnawing hunger, she’s struggling to make money. She’s an unpaid intern at a local art collective, living in a studio space she’s not technically allowed to sleep in, befriending a few other artists by accident, jealous of the human intimacies they share doesn’t understand herself. She’s ordered some dried pig’s blood online to keep herself from starving but it’s not keeping her fed properly, and with all these humans around she’s finding it difficult to not stare at the veins throbbing in their necks.

Lydia is an incredibly annoying character – she’s lazy, spending hours on the internet watching YouTube videos, and it’s never really explained to the reader why she’s unable to work and make her own money. At one point, she laments how poor she is compared to vampires in movies and literature, wondering they are always so rich, and she’s not. It’s obvious to everyone but her why she’s struggling, but I wanted to give her the benefit of the doubt in assuming it was her lack of blood and proper vampire diet that made her so listless. She also suffers from general anxiety, not wanting to leave her studio apartment, content to just stay inside where she can avoid human interaction and simply think about stuff. We see straight into this woman’s psyche, where she feels like she’s admitting dark and disturbing things, but in reality she’s not. This particular vampire is of no danger to humans, because it would require her getting off her apartment floor to do anything, which she seems unwilling to do.

Furthering the millennial trope is the fact that Lydia’s listlessness can be attributed to her mother, who withheld affection, and constantly reminded her of how evil and dirty they were. Her mother turned her into a vampire when Lydia was a newborn because she wasn’t being nourished by human milk or formula, so this was a way of ‘saving’ her. But Lydia’s mother resented the fact that she was a vampire herself, and hated their need for blood, which is why they never hunted humans, and forced themselves to drink pig’s blood (what she considered a dirty animal) and nothing else. Lydia hid her diet from others by not eating in school, and sipping blood through a kid’s sippy cup with a special straw that disguised what she was drinking. Although Lydia doesn’t come out and blame her mother directly, it’s clear that her lack of skills (both human and vampiric) can be traced back to a childhood of quiet unhappiness and shame.

Despite the lack of action in this book, when Lydia finally does something, it’s described in very visceral terms. Her body is something that she’s unable to really sustain, but she appears to be a normal young woman to everyone else, so her body is treated as such. She is grabbed at and leered at by various men in the few times she goes into public, and her reactions to this are very similar to a human’s; she remarks how odd it is that she feels ashamed after these instances, even though she’s done nothing wrong. Other than her eating habits, Lydia is more human than vampire, which makes this book thought-provoking, but also frustrating for those looking for a Halloween-ish read – Dracula this is not!

I’m struggling with my opinion on this book, or perhaps I’m simply over-analyzing it because I don’t know what the author was intending with this text. It’s not an unpleasant read; the writing is actually quite lovely, but like Lydia, I wandered aimlessly through the text hoping for a clear path forward that I never really got.