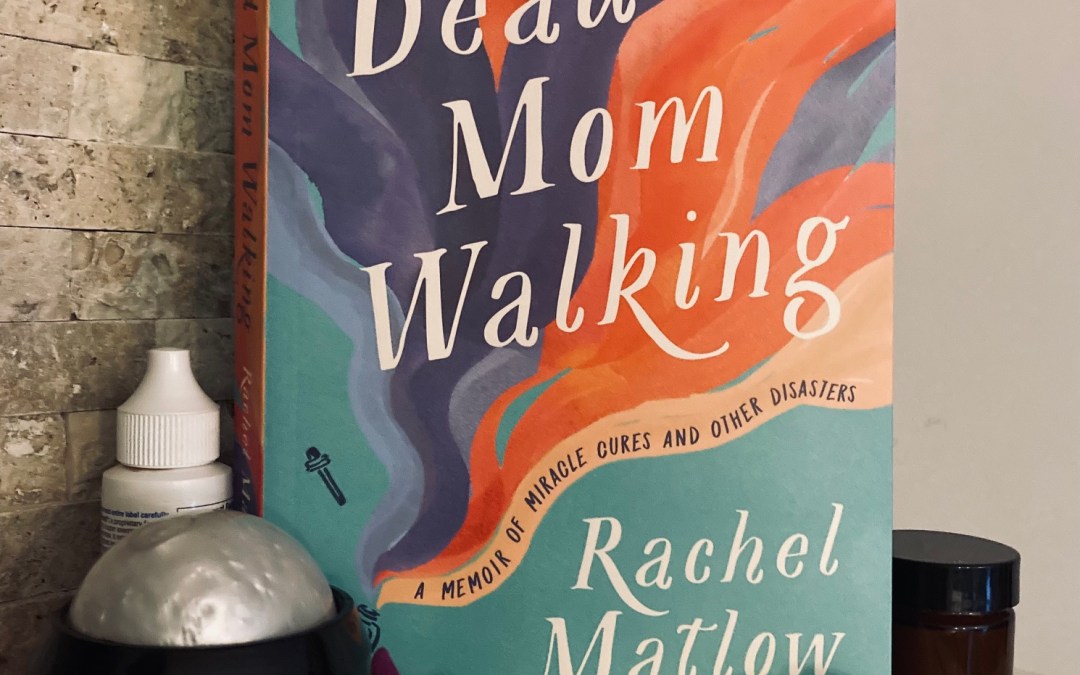 I’ve had the book Dead Mom Walking by Rachel Matlow on my shelf for what feels like ages (its only been two years, but that’s a long time for me). I had read really positive reviews of it when it was released, and I knew it was going to be funny, so I kept it handy in hopes I’d finally reach for it. I did, and I raced through it in a few days. It’s a work of non-fiction, essentially the story of one woman’s mother dying of cancer. The subject is clearly not funny, but the circumstances around it and the author’s reactions to it are what make this book entertaining. It may take me the length of this review to convince you of how funny and relatable this story is, but I know I’ll be successful in making you want to read it too.

Rachel Matlow had a fairly enviable life; she was living in Toronto, working as a producer for the CBC on their popular arts show ‘Q’, and had a close relationship with her brother Josh, a city councilor, her Dad Teddy, a retired judge, and her feisty mother Elaine. But a few difficult years were ahead, signaled by her mother’s initial cancer diagnosis, which was fairly positive at the time; Elaine’s cancerous polyps were caught early, and she had an 80-90 percent survival rate if she had them removed via surgery. Unfortunately Elaine was afraid of surgery, deciding she wanted to treat her cancer with naturopathic remedies instead, including lots of herbal tinctures, mediation retreats, and infrared sauna sessions. Rachel and her family were understandably frustrated by this, and as the months passed, Elaine’s cancer spread. Alongside this family drama, Rachel’s workplace was slowly becoming toxic as host and boss Jian Ghomeshi became increasingly difficult to work for, his ego growing along with the ratings. If you’re a CBC listener you are likely familiar with how that story turned out (spoiler; badly! Ghomeshi sexually assaulted women, and although was kicked off the CBC, he’s trying to resuscitate his career), but living under this stress and then the media storm afterwards all took a toll on Rachel’s mental health as she navigated these difficult years of her life.

Again, you’re probably wondering why I’m praising this book as funny! I’ve got quotes, I promise. It’s not entirely funny, in fact the end made me a bit teary, but Matlow’s voice shines through on the page, likely the most important factor in the success of this book. Because she was so close with her mother (they were more like friends), one can understand her intense anger and frustration at Elaine’s delusional choice to not get surgery, or do anything a Western medical doctor advises.

The humour in this book works so well because Matlow is all of us; wondering why her mother is so crazy, us collectively shaking our head at her insistence that ‘being positive’ will cure her of cancer. The book opens with Matlow attending a spiritual retreat with her Mom that uses psychoactive plant remedies to ‘cleanse’ the body:

Another great example of her humour AND her mother’s craziness:

“I begged and pleaded with her to see a surgeon…I soon regretted not having been more specific. Mom bought a ticket to Brazil to see a ‘psychic surgeon,’ known as John of God, who performed invisible procedures with the help of spirit assistants. Fuck my life.“

To be clear, although I chose a quote with a curse word, there isn’t much swearing in this book, but when there is it’s usually used for comedic effect, and it works.

There’s obviously quite a bit of sadness in this book too, and as a woman who lost her mother as a teen, I couldn’t relate to all of Matlow’s fears, but I could certainly understand them better than others. She talks of jealousy, envying her friends who still have their mothers alive and well, and I’ve been there too, although I remind myself of how lucky I am to still have my father – many people in their late thirties have lost both parents, or never had one or both at all. Matlow also recognizes her luck, and is financially stable enough to engage in therapy on a regular basis, which offers some surprising moments towards the end of the book.

Have I convinced you how funny this book is yet? Even if it’s not full of LOL moments on every page (you have to read David Sedaris for that), it’s certainly a worthwhile read, especially for anyone who finds themselves shaking their head at a loved one’s medical choices.