Book Review: The Finder by Will Ferguson 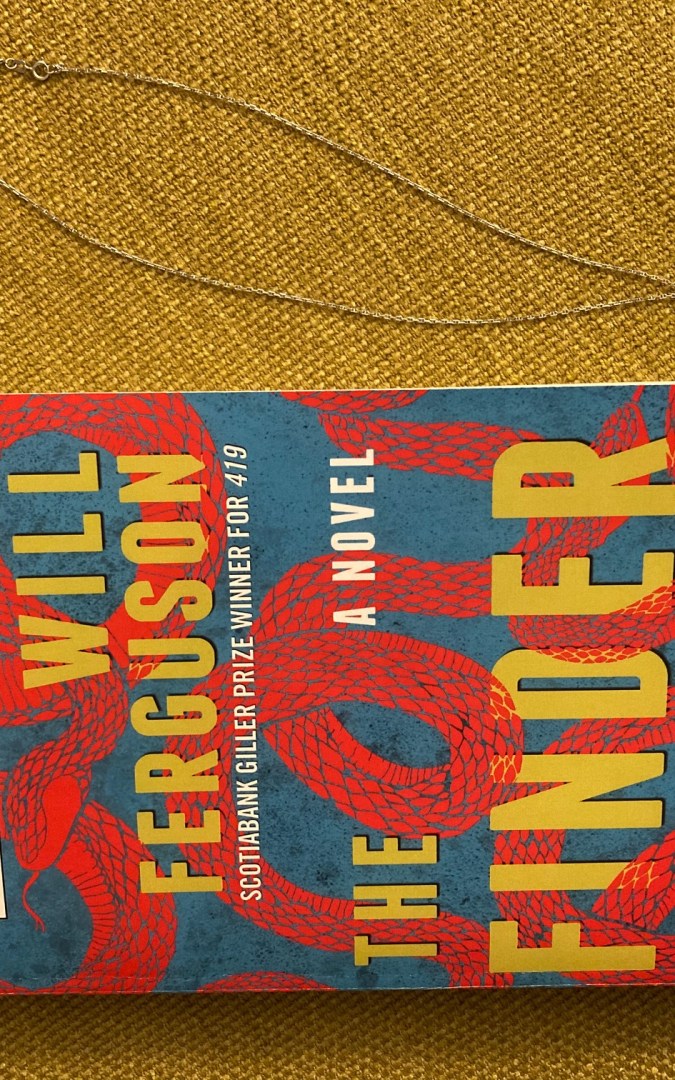 I’m a proud Calgarian and the fact that Giller Prize winning author Will Ferguson also lives in Calgary is just the tip of the iceberg of our wonderful writing community. I’ve been posting lots of local book reviews lately for good reason, we have a wealth of exceptional writers in our midst! I’ve often stated that Ferguson’s works of humour are my favourite, and I actually didn’t really like his book 419 that won the Giller (sorry not sorry), but I’ve accepted the fact that lately he seems more interested in writing literary adventures than hilarious musings on travel so here we are with a review of his latest book, The Finder.

Like the tangled up snake on the cover, this plot is all over the place; we take deep dives into people’s inner lives while we also chase down lost objects in an international man-hunt. We have multiple perspectives that come from all over the world, from the streets of Christchurch New Zealand to the southern-most island of Japan, to the downtown streets of New York. It wasn’t clear to me until about a third of the way through the book what the point of it all was, but now that I’ve completed it, I can confidently say this book is all about finding the person who finds things. It’s not obvious who this person is, and a few red herrings in the form of bodies come our way to distract us from the real target, but we’re not the only person searching for this famous and wealthy criminal. Gaddy Rhodes is an Interpol agent who has been searching for ‘the finder’ for her entire career, but has finally pushed too far and landed in an administrative role once her higher-ups get frustrated with her. Later we meet Thomas Rafferty, a travel-writer skating along on a reputation he formed decades ago when he wrote a groundbreaking travel memoir that’s since become old news. Other characters come and go, but Gaddy and Thomas seem to hold the most persuasive and important of roles. ‘The finder’ himself is a character shrouded in mystery throughout most of the novel so I won’t include any spoilers here.

Ferguson shines his brightest when writing characters with sharp wit and a bit of world weariness. For this reason, I loved reading about Rafferty and his biting attempts at polite conversation. Towards the end of the book we learn more about his motivations and why he’s so despairing, but I can’t say it felt very authentic once we were let in on the secret. It all seemed a bit forced, a puzzle piece jammed into place to complete a tenuous storyline within the plot. In general I found the female characters simpler, but easier to believe and identify with. They too held their secrets, but their impulses were much more credible, their bravery and ingenuity the highlights of the complicated story.

Ferguson has extensive experience travelling, and I read his (hilarious) memoir about travelling through Japan years ago, which explains why this book’s setting jumps around to so many places. It begins on an island in Japan through the eyes of its sole police officer, and I loved reading about that man so much that I wished we weren’t whisked away from him quite so soon. This officer discovers a victim of the elusive ‘finder’ but we also learn about the history of his island, his relationship with his wife, even details about his daily biking habits. Shortly after becoming absorbed into his backstory, we shift to an official briefing about the death, and then again, we find ourselves in the busy streets of Okinaway City. I grew frustrated at these quick transitions, wishing I could just return back to the simple slow island we started on. In this recent article Ferguson admits to spending more time outlining books than writing them, which explains why I found The Finder so difficult to follow. I believe that when you spend too much time mapping out the plot, the experience of the reader gets lost.

Although this does sound like a negative review of this book, I do want to encourage people to not give up on Will Ferguson and his writing. He is a very funny and talented author, and even though this book isn’t humorous, his wit still pushes through in bit of dialogue and character self-reflection. I have no doubt many people will like this novel, but I’m still wishing for the good ol’ days when his sole aim was to make people laugh. I’m also being hard on him because now that he’s a Giller winner my expectations are heightened, which some may consider unfair (sorry not sorry). The gloves come off once you are widely known as a bestselling writer, especially when your backlist is as impressive as his.