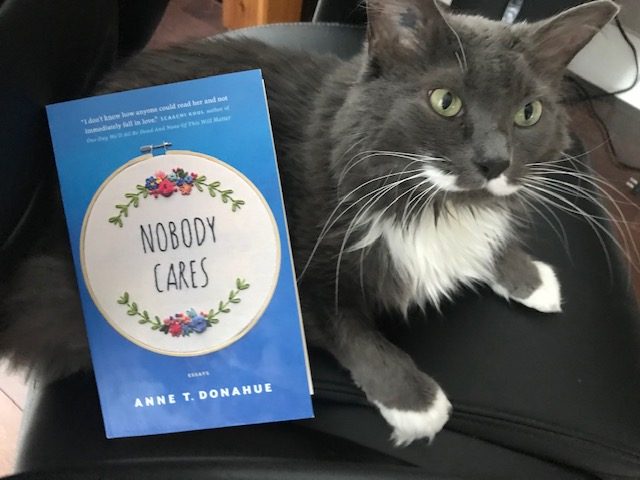 I knew I’d like Nobody Cares by Anne T. Donahue before I even opened the front cover. Why? Please refer to my list below:

Nobody Cares is a book of essays that span Anne’s life so far; she describes many early-life memories up to her present reality, and almost none of these stories are flattering. The honesty that Donahue gives us is astounding, and although it made me cringe at times, I loved her for it. Aside from a few differences, her experiences as a middle class youth in Southern Ontario are very much mine as well. I wish I was as successful as she is, but she went through hell to get where she is now, so her position is well-earned. The essays detail her struggles with mental illness, alcohol addiction, and near-bankruptcy. But this book is far from pitiful-many of her stories are lighthearted and fun, one in particular details her long-time crush of Leonardo DiCaprio, so she strikes a nice balance and tone.

This book elucidates a very subtle yet pervasive pressure that I believe people of my generation constantly contend with, and that is the requirement to exceed expectations publicly. Living our adult lives on the internet, we are now expected to demonstrate our successes in a spotlight. Milestones are suddenly something to obtain rather than celebrate; like a video game, we rush onto the next phase of our lives (graduation! marriage! kids!) to fulfill a ticking clock, and we will document our high points with a beautifully-staged selfie to prove to ourselves and others we’ve ‘made it’. Although this doesn’t seem all that horrible, it takes a toll on our mental health. Make no mistake, each generation has their own challenges, and this simply seems to be one of ours. Donahue’s essays all work within this environment that may seem strange to people older than me, but have myself and my peers nodding their heads enthusiastically.

So I’ve already recommended this book to a few girlfriends because I’m quite sure they would enjoy it (we grew up together, outside of Cambridge), but I think it will appeal to lots of people my age or younger. I should mention that it’s written in a very conversational-style which is quite common in celebrity/public figure memoirs, but it may put other people off so do keep that in mind. Also, it’s a book of essays so every once in a while it may seem a bit repetitive, but that’s just the way this genre goes, so you get over this pretty quick. These two facts don’t detract from the book in any way, but as a book reviewer I feel it is my duty (hand over my heart) to alert readers to this.

This book is short but it includes so many important reminders and lessons, one of the most important being: nobody cares! Although we may berate ourselves for saying something stupid at that party two weeks ago, no one cares about it anymore because everyone’s too focused on themselves and their stuff. Although this seems like an obvious lesson, it’s reassuring to read it in print, so let’s just take a moment and be thankful for the wisdom of Anne T. Donahue.