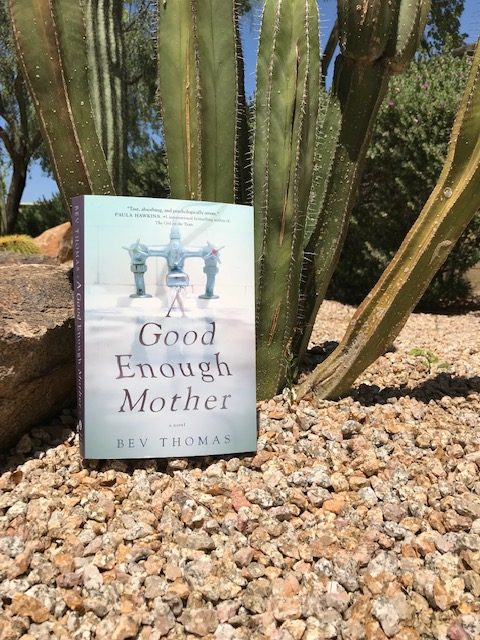 I originally read A Good Enough Mother by Bev Thomas with the intentions of including it in a mother’s day book recommendations wrap-up. I thought it would be perfectly suited for this purpose; it has the word “mother” in the title and it’s all about a woman who’s a mom trying to be ‘good enough’ in all facets of her life; a typical story that would appeal to women. Plus it has a thriller element so even better for those who would love suspense. But as I worked my way through this book I realized with a sinking family how inappropriate it would be for me to recommend this on a cheery mother’s day segment for my local television station. This book is just too dang heavy. It’s a good book, don’t get me wrong, but it could trigger lots of people who suffer from anxiety, depression or suicidal thoughts.

Our protagonist is Ruth Hartland, a highly-respected therapist that specializes in patients who have just experienced a traumatic event. But Ruth is struggling on a personal level with the fact that her teenage son Tom disappeared over a year ago, and now a new patient Dan, who looks eerily like Tom, has begun seeing her for treatment. Ruth begins to push her professional boundaries as it becomes clear Dan is a risk to himself, and in misguided attempts to stamp down her personal pain and focus on others as a distraction, her life slowly begins to unravel, ending in a violent and shocking act that comes as a complete surprise to the reader.

As the book progressed, I was sure I knew how it was going to end. I was convinced Ruth was an ‘unreliable narrator’ and things would turn out a specific way. I’m so glad to say I was wrong about this-the author cleverly leads readers down one path, then switches the direction right out from under us. For those who read a lot of domestic thrillers and suspense novels, you’ll be pleasantly surprised at how sneaky the plot twists are in this book. Another unique aspect to this novel is the fact that we continue on for awhile after the major incident at the end, exploring the fallout of what happens with character’s long-term reactions and experiences are all included. Things aren’t tied up with a neat little bow, but we do get closure on the major plot points which is a satisfying relief after the heartwrenching lead-up to the climax.

Even though this book focuses on Ruth as a mother figure, you don’t have to be a parent to ‘get’ this book. It may not be as emotionally affecting if you don’t have children, but that’s probably a good thing! There’s a few stories involving the deaths and disappearances of young children and I found these particularly difficult as the mother of two young children myself. There are numerous traumatic stories included in this book because of Ruth’s career as a trauma therapist; it’s her job to listen to people’s horrific experiences and help them recover emotionally, but as a reader, it can be difficult to read about so many in one book.

I’m aware this review is starting to sound contradictory, so I suppose the most important thing to take away is this: A Good Enough Mother is a successful example of a thriller, but it’s not for the faint of heart. Read with caution!