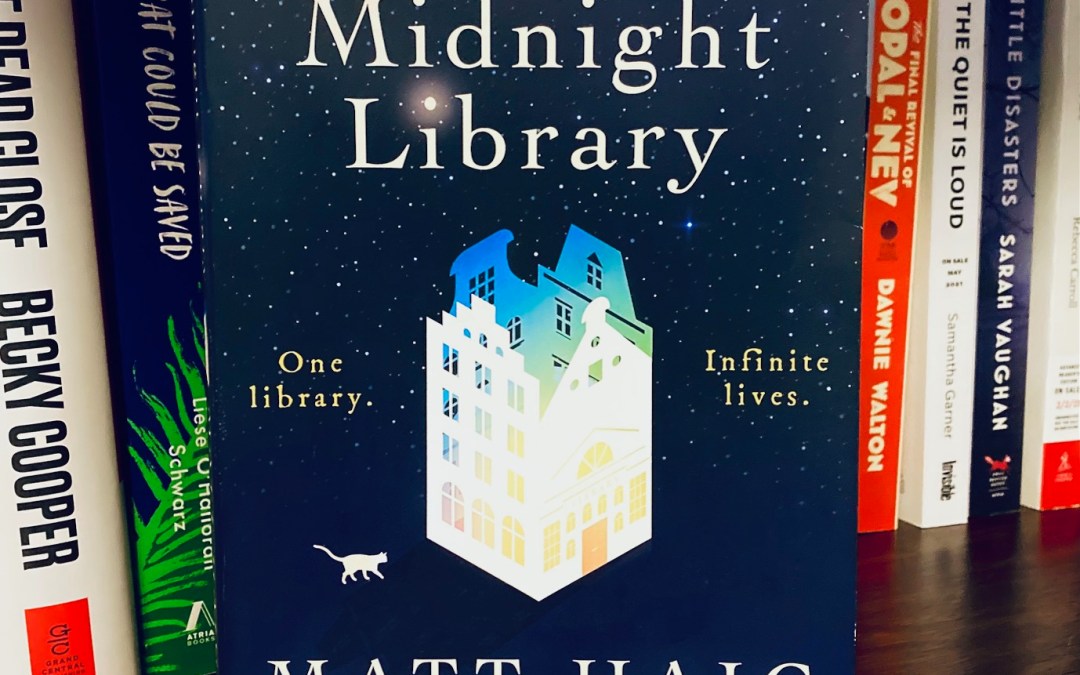 I am continually impressed by the eclectic mix of books that Matt Haig has published in the past few years. The first book of his I read was historical fiction, then I moved onto a work of non-fiction which I failed to write a formal review of, but talked about on the radio a few years ago. He’s managed to hit it big with book clubs this time around with The Midnight Library, and being a book club book lover myself, I didn’t want to be left out of the fun. I was warned beforehand that this book is sort of sad (which it is), but in true Matt Haig fashion, you do feel better after having read it so I’d still consider it a feel-good novel. Plus, this is a book about books, which as you know, is my favourite kind of book.

Nora Seed lives with many regrets in her life. As a teen, she gave up her impressive swimming career because she felt it was too much pressure, and didn’t like the way it set her apart from her peers. When she got a bit older, she formed a band with her brother and buddy, and they were offered a record deal, but instead of taking it she stayed home and got engaged to a man with his own dreams. That relationship ended, as did her job at a local guitar shop. When the cat she rescues dies on the side of the road one night, Nora decides life is not worth living and takes too many of her anti-depressants. She then finds herself in a library, with a kind woman from her past there to guide her. In this library are millions of books, each representing a life that Nora could have had. Once Nora starts reading that book, she is transported into that life, discovering what could have been if she had made different decisions. She dives into the life of a rock star, the life of a famous Olympian, the life of a woman who devotes her life to dogs and a man who loves them, the life of a woman who owns a famous winery with her quiet husband, and the life of a glaciologist who has devoted her time to studying climate change. As she samples each life, she is whisked back to the library once she realizes she is disappointed with these alternate realities, each never living up to what she deems the ‘best’ way to live.

I honestly couldn’t think of a more comforting idea than ending up in a library after death. Could you imagine? To just live out eternity reading all the books ever printed? Haig is no doubt a book lover himself to have dreamt up this scenario, but it’s a comforting thought no matter what your religious or spiritual leanings. I also love the metaphor of living out different lives through the printed page, and books as a portal to another world – every bookworm in the world is nodding their head as they read this.

Despite the warm and fuzzies I get from the setting itself, there is a dark layer to the story that is hard to ignore. Nora is depressed and incredibly unhappy with the way her life has turned out. And the more lives she enters through the library, the more she realizes how difficult being happy with one’s lot in life truly is. Haig himself has openly struggled with mental illness, even on the verge of committing suicide at one point, so he is a shining example of what you can become if you step away from that ledge, but Nora’s ledge is much too persuasive. As the reader, we aren’t made aware of whether Nora will actually get a second chance at life, or if she is in some sort of purgatory, so this gives the plot an element of hope that keeps it from teetering into a dismal place. The library begins to slowly crumble around Nora while she searches for her best life, which also adds some suspense, but the constant whisking back and forth between lives was enough to keep me interested, regardless of what Nora’s fate was going to be.

Surprisingly, I didn’t feel all that attached to Nora as a character, I was more interested in the final outcome and what grand lesson about ‘life’ we were meant to get out of it. Some may find this book too didactic, but I find all of Haig’s writing comes across this way, and I actually enjoy that aspect of it most. You don’t have to agree with his point of view, but it’s an interesting perspective nonetheless. I won’t spoil the lesson because it has a direct relation to how Nora fares in the end and that would be too big of a spoiler, but if you’re ready to jump into a bookish adventure with no clear pathway home, you’ll definitely want to give The Midnight Library a try.