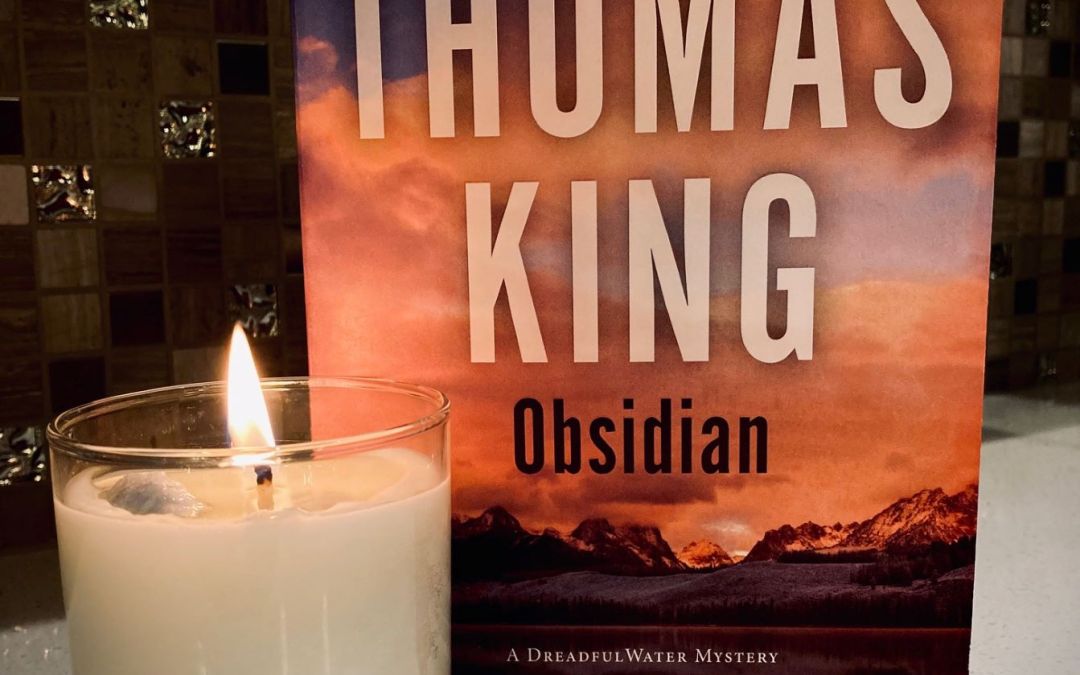 I don’t like taking risks, but when I do, they are usually book-related. I threw caution to the wind last week and started reading a mystery series five books in. Obsidian by Thomas King is the latest in his DreadfulWater Mystery Series which I’ve had recommended to me for years, but finally got the chance to read. HarperCollins kindly offered to send me all the books so I could start from the beginning, but that felt like a huge commitment I wasn’t ready to make, so I started here instead. Perhaps reading the entire series would have endeared me towards the protagonist and lead detective Thumps DreadfulWater a little better, but I did find the plot engaging, easy-to-follow, and entertaining nonetheless. Similar to another Canadian mystery series I just discovered, the cast of characters that surround our detective is one of the strongest elements of the story, and reason alone for picking up this novel.

Thumps has just returned to the small town of Chinook after a trip down to the California coast to revisit a cold case from years ago. He’s retired, now focusing on photography, but gets roped into investigations from time to time, as these detective-types tend to do. We learn that awhile ago, his girlfriend and her daughter were murdered on a beach, which is the cold case he can’t (understandably) forget about. There were small pieces of obsidian rock found in their mouths, and the same rock has been left at some crime scenes back in Chinook just recently. With the help of some friends and the local Sheriff’s office, Thumps is trying to determine who this killer is; a copy-cat, or the same person back after all these years? But when dead bodies start to show up in Chinook with the rock in their mouths again, cracking this case takes on a new urgency and Thumps is forced to revisit some painful memories from his past in an effort to solve these newest murders.

Because the book begins with a return to Chinook, we have the pleasure of being re-introduced to aspects of Thumps’ life, which I really enjoyed. Being retired, Thumps has a few places he likes to visit, including Al’s diner, which serves up a delicious breakfast at a counter with regulars. What I was surprised and delighted by was the diverse set of characters we meet in Thumps life; Al is a woman, to start. Thumps himself is an Indigenous man, and surrounded by quite a few Indigenous characters, both on and off reserve. We meet a few gay women and black people, as well as a small, opinionated Greek man who runs a bookstore. Keep in mind this is all in a small-town, and yet the word ‘diversity’ is never raised – it simply is. Race is acknowledged and then ignored, aside from a few jokes. Aside from the bad guys, Thumps’ attitude seems to be ‘live and let live’, and although everyone likes to be up in everyone’s business (as small towns tend to do), people are respectful of each other and their right to live as they like. At one point Thumps brings his black friend to a doughnut shop, famously run by a very racist man, but the two men bond over their time served in war, so things seem to move along smoothly after that. I haven’t decided if the utopia of this town and their ability to co-exist happily together is one that isn’t realistic, or one I just haven’t come across in person because I don’t live in small towns, but it was a pleasure to read about nonetheless.

Despite the town’s small-town mannerisms, there is a darker tone to this book, and that’s the crimes themselves. A few of the murders are quite violent, and although King doesn’t delve into gory specifics for too long, these are murders of innocent people. Like in most police procedurals (which this most closely resembles), the hope is that the criminal will be discovered as soon as possible because the various versions of death being presented to the reader are quite gruesome and it’s clear the murder is an incredibly dangerous person. Even worse in this case, the victims remain largely unconnected to the mystery at hand and seem entirely innocent of any wrongdoing themselves, which makes the culprit and his/her motives even more terrifying.

Thumps is a difficult man to like; he’s grumpy and I became mildly annoyed with his insistence on eating a big breakfast every morning while he was ignoring/putting off other people in his life, especially women. Still, he didn’t put me off this series, and although I tend to prefer a cozier mystery, I’ll be looking forward to filling in my gaps in the DreadfulWater mysteries.