Book Review: Well, This is Exhausting by Sophia Benoit 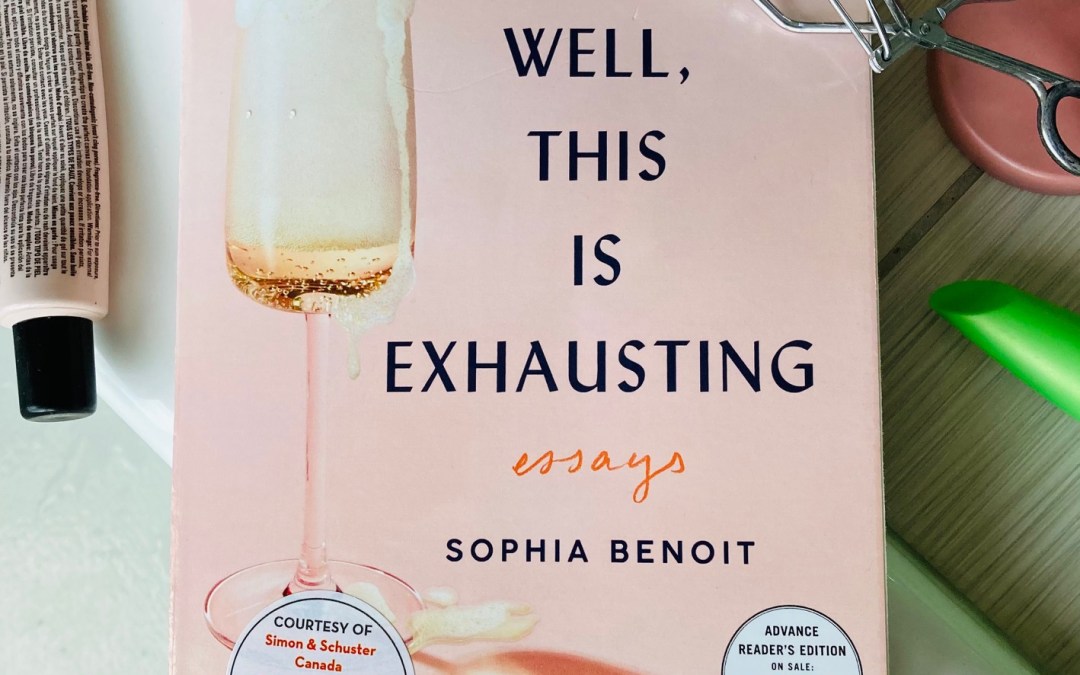 I’m finding myself drawn to collections of essays more and more as I get older. Perhaps it’s because I have less time on my hands, so reading self-contained chapters is more rewarding, or maybe it’s because I’m just curious about other people’s perspectives, and an essay is the perfect way to dive quickly into someone else’s psyche and give it a quick go. I know I’m not the only one; celebrity-authored essays are a growing genre that many publishers are focusing on, and I recently discovered one of my new favourite writers, Samantha Irby through her latest book of essays. Like Irby, Sophia Benoit has a huge following on twitter and is known for her humour, so it comes as no surprise I find her writing hilarious too Well, This is Exhausting is Benoit’s first book, but it will no doubt be her first in a long line of books, she’s got a lot to say, and I’m more than willing to listen (read).

Benoit’s essays generally follow a loose timeline from her childhood to present day. I’m not sure how old she is now (I’ll guess late twenties to early thirties) but the majority of her essays focus on her time in college, which seemed to have been a formative time for her. She limits her subject matter to experiences she herself had, or women her age have had. She readily admits she is still learning about the different facets of feminism, and how to be a better ally for those in our society who are pushed to the margins (LGTBQ, people with disabilities, etc.) while also stating the challenges of living in the world as a white, cis, woman, arguably a position of privilege especially when living in a first world country. While she tackles these bigger subjects, she also revels in the silliness that being a young woman offers, like putting on make-up and drinking with friends before going to a club or bar. Some essays are quite vulnerable; she struggled with her weight growing up and fluctuated between various eating disorders as she entered college. The way she viewed her own self-worth in relation to the male attention she received in her earlier years is heartbreaking, but it seems she has moved past this dependence on external validation. Each essay is centered on a personal anecdote or situation, and acts as a jumping off point to her thoughts and feelings on wider society.

When I finished the first few pages of this book, I was worried I would grow tired of Benoit’s voice. She is constantly cracking jokes, and includes lots of italicized words, exclamation marks, and asides. Her tone is very conversational, it reads like she is telling us a story and she’s anticipating our reactions and responding to them in real time. And yes, I am completely aware of the fact that I write in the exact same style!I’m happy to read this kind of writing in shorter spurts, but a whole book of it made me nervous. Despite my hesitance, I kept on, and was rewarded by her thoughtful yet still entertaining observations, all mixed in with jokes about her struggles with dating and her overly-emotional family. She is hard on herself and doesn’t hesitate to point out the toxic way of thinking that led her through her college years, but it’s clear she has done a lot of self-analysis to have the ability to recognize how self-destructive she was back then. By the end of the book I grew to love her unique voice, and days after finishing the book her phrases are still bouncing in the back of my head, and I find myself laughing at little things I’m doing or thinking because I know it’s something Benoit would easily make a joke out of.

I’m noticing a new trend that is shining through women’s non-fiction writing, and that is the explicit acknowledgement of privilege, plus the pointing out of those who do not have it. Compared to the male writers I’ve read recently, white women seem to have no issues with identifying the systems that hold them up, while these same systems to do not benefit every single woman either. For instance, the BIPOC population still struggle to gain the same footing we white women have enjoyed for longer (thought not as long as men, let’s be honest here). This is a welcome distinction for me, because while I don’t consider myself a victim, and haven’t met many women who do, I think it’s important we acknowledge how we can still improve things to create a better and more equal world for everyone. We need to identify that things aren’t perfect before anyone makes an effort to change it, and this is exactly what Benoit is doing. She doesn’t feel sorry for herself and and she’s making jokes about her situations more often than bemoaning the – but she also doesn’t shy away from talking about her experience of sexual assault and the fact that it’s so prevalent that women have been conditioned to question whether they encouraged it before it happened to them. Some may find the transitions difficult to follow, but I appreciated her efforts to be funny while she discussed serious subjects, it provided a pleasing balance that made the book to fun pick up no matter which essay I was diving into next.