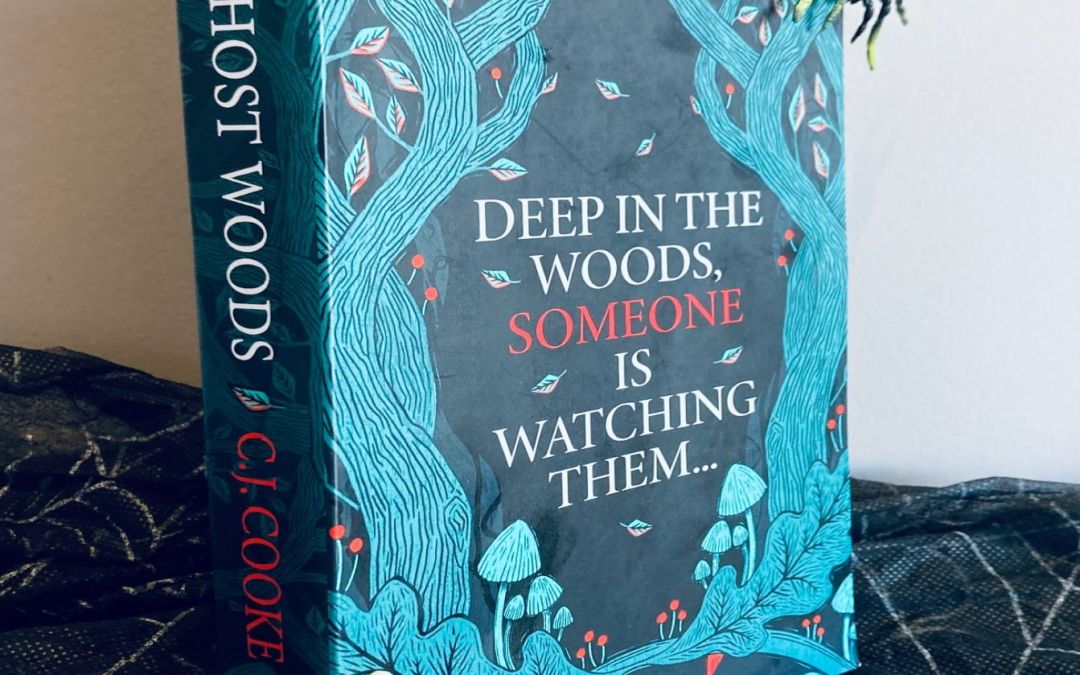 The atmosphere of The Ghost Woods by C.J. Cooke is a winning combination of ghosts, witches, creepy houses, and eerie secrets that you’re better not knowing. I read this book a few weeks ago and some of the images are still floating through my head, not because I was surprised by them but because the book was so cinematic in its descriptions. Last Halloween I read another book by this author that I really enjoyed, and I’ve continued the winning streak with her latest release. This is definitely an author to watch and follow!

Two different young women are dropped off at Lichen Hall, a creaky old mansion in the middle of the woods for unwed mothers. Pearl is dropped off in 1965, a feisty nurse who is resentful of being fired from her job, coming from a wealthy family who are disgraced at her pregnancy out of wedlock. Mabel is dropped off six years prior to that, adamant that she is a virgin despite her pregnancy, coming from a very poor family who treats her terribly no matter what her circumstances. Lichen Hall is owned by the Whitlocks, an older couple with a tragic past; their son having passed away in a car accident, they take in young women and help them adopt out their newborn babies. But the house also has a mythical past; it is apparently cursed by a witch who roams the woods outside, and one wing of the house is entirely closed off due to the fungus that has sprouted in its halls, completely overtaking the walls and floor. As both Pearl and Mable continue their stay waiting to give birth, strange things appear, like glimpses of young boys in the hallways, creatures in the woods that don’t resemble any flora or fauna, and fairy rings of mushrooms. And Mrs. Whitlock seems to be oscillating between two different personalities: the kindly woman of the manor, and a terrified old woman trapped in a prison of her own making.

As I take a deep dive into horror, ghost and witch stories for the month of October, I’m noticing a clear theme that’s shown up in most of these books, all penned by women. Feminism, the independence of women, the fear of women and their perceived hysteria, their sexuality have all shown up in one way or another in these books. As I think back to my literature-studying university days (well behind me now), I seem to recall a connection drawn between gothic literature and the female body, and what I’m noticing now is the modern-day result of that. In Cooke’s novel the majority of the characters are women, and in this isolated spot they fight amongst themselves, they help each other give birth, they console one another, they fall in love with each other and in many cases, they protect each other. Society has relegated them to this space of shame, but they have made it their own as best they can despite the external forces raging against them.

Cooke expertly weaves multiple elements of creepiness into one story, without the plotline becoming cluttered or unbelievable. Ghosts, witches, and eventually murder all make an appearance, unnerving both the characters and the reader simultaneously. Because the girls’ stays are 6 years apart, it’s difficult to piece together their experiences, which are somewhat similar despite their different circumstances and personality. As time passes and the stories begin to intertwine, some questions are answered, but even more are raised, lending the book an air of suspense that rivals that of a thriller. Almost the entire book takes place in this house amongst very few characters, so it’s an impressive feat that the story is such a page-turner, considering its significant length and limited cast. In another author’s hands, these are all features that could easily end up in a confusing mess, but Cooke manages to include a vast array of plotlines to great success.